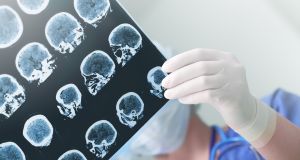 In an ideal scenario, stroke is identified quickly and the patient whisked to a specialised hospital where the waiting medical team administer clot-busting drugs, and then scan the brain so the location of the clot can be established. Photograph: iStock

The improvement in stroke services is one of the few genuine success stories in the health service in recent years, but the gains made could easily be lost.

It isn’t so long ago that the treatment for stroke was to give patients an aspirin and send them to a nursing home for the rest of their unfortunate lives. Today, the system can provide a range of cutting-edge treatments that can save lives and minimise harm, but access to these therapies remains very much a postcode lottery.

Over the seven years of the national stroke programme, the death rate has been cut by more than a quarter and the rate of direct discharge to nursing homes has almost halved.

The number of hospitals with stroke units has been increased from one to 21 and the rate of potentially life-saving thrombolysis (clot-busting) treatment grew tenfold to 11 per cent, one of the highest national rates in the world.

Under the ideal scenario, stroke is identified quickly and the patient is whisked by ambulance to a specialised hospital such as the Mater where the waiting medical team administer clot-busting drugs, and then scan the brain so the location of the clot can be established. The patient is then sent to a neurological unit, such as Beaumont Hospital, where minimally invasive technology is used to remove the clot from the brain.

But what if your stroke is not identified early? What if you live near one of the hospitals without a dedicated stroke unit – in Letterkenny, Tralee, Ballinasloe, Tullamore, Blanchardstown and Navan?

Where treatment is delayed, outcome inevitably worsens. Strokes, the interruption of blood supply to the brain, can last just seconds but have catastrophic consequences that last a lifetime.

Sadly, thanks to a lack of beds and gaps in services, less than half of Irish stroke patients will be treated in a dedicated stroke unit. Twenty per cent of the population lives outside the catchment area of a stroke unit. Northern Ireland has more stroke beds than the Republic, despite its much smaller population.

And while services in the Republic have improved, they still lag behind other countries that have made significant strides in treatment. As a result, for example, Ireland now ranks only 22nd out of 43 European countries for the rate at which clot-busting drugs are administered.

Whatever about hospital services, the options for rehabilitation for stroke survivors are extremely limited. The vast majority of hospitals have no access to community rehabilitation teams to continue the therapy that is essential to help patients recover after discharge. Despite the savings that can be made by providing services such as physiotherapy, just 1.5 per cent of Irish patients get access to early supported discharge teams compared to 35 per cent in the UK.

Lack of resources is frequently cited as a bar to progress in the health service, but in this case other factors are at play, as the review of the stroke programme by outgoing clinical lead Prof Joe Harbison shows.

He points to opposition by managers to the involvement of clinical specialists in implementing the programme, opposition by local units to directions from above and a widespread antipathy to changing the status quo.

As a result, the system has gone from being “appalling” a decade ago to “merely inadequate”, Prof Harbison told The Irish Times. “What really worries me is that we’re not on a trajectory to getting a lot better.”

So this is our choice: Are we happy with mediocrity, and its consequences – avoidable deaths and incapacitated patients? Or do we strive to improve the system further, making use of the specialists who are eager to be involved in delivering these improvements?