Insights from the people who treat the most extreme cycling injuries

Brain and spinal injuries, amputations: the National Rehabilitation Hospital has seen it all

Cycling injuries result in three times more brain injuries over all other causes at the National Rehabilitation Hospital in Dun Laoghaire. 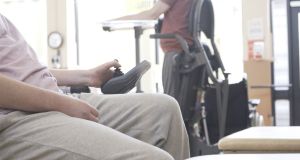 Physiotherapy at the National Rehabilitation Hospital in Dún Laoghaire

A specialist at the National Rehabilitation Hospital (NRH) has warned cyclists: “This is not cowboy territory, red light means red light.”

Dr Mark Delargy is medical director of the brain injuries programme at the hospital in Dún Laoghaire, Dublin, where about 10-15 patients end up each year following serious cycling incidents.

More than 100 cyclists are injured in crashes each year, according to the Road Safety Authority, some of them so seriously they end up in the NRH.

“Certainly within the cyclist accidents that we see, the majority of the cyclists end up with brain injury. A smaller number end up with spinal injury and even in some cases, tragically, amputation,” says Dr Delargy.

He notes that, from the data compiled at the NRH, there appeared to be a peak in cyclist injuries in 2014, when 15 patients were admitted following accidents.

Up to 2014, the breakdown of the gender of patients admitted for cycling injuries was about 90 per cent male to 10 per cent female.

For 2015 and 2016, female patients admitted as a result of cycling injuries were on the increase – up to about 40 per cent.

As well as those injured, the number of cyclists killed on the roads in the first half of this year was double that recorded in the same period in 2016, according to the latest figures. Ten cyclists died in road accidents in the six months to June, compared with five in the same period last year.

“We would like to see a situation where there is a control and reduction to the number of deaths, and for the survivors, we will be here to treat them,” says Dr Delargy, a keen cyclist himself.

He says cyclists must obey the rules of the road as well as motorists.

“I am a motorist and a cyclist and primarily I would like motorists to think that the cyclist is a person who is giving me as a motorist more time on the road because I have parked my car at home and I am now taking up less space on the road by cycling.

“I would also like the cyclist to think: this is not cowboy territory, red light means red light. Cycling on pavements is wrong. It can be dangerous to pedestrians and young children, and we as a cycling group should not entertain cycling on pavements as a reasonable activity.

“There’s a two-way street here, and I would also like to speak to the county councils and say, for my part, I’ve changed from a racing bike to a cyclo-cross bike. I have changed to this bike because the roads are so bad. The potholes are so great that it is not safe in my view to cycle on a lighter-type bike and this is why I am now using a bike that is fit for cross country on Dublin roads.”

Dr Simone Carton, principal clinical neuropsychologist and head of the department of psychology at the NRH, reiterates her colleague’s message about greater road safety.

Motorists and cyclists need to have a greater respect for each other and respect the road, she says.

“The cyclist is obviously so much more vulnerable than someone in a car because they do not have the same protections,” she says. “Physically, they don’t have that cocoon of the car to protect them. A small impact can have devastating consequences for the cyclist.

“However frustrated motorists may feel about cyclists, the bottom line is that there is no comparison in terms of the protection that the car user has. The cyclists are hands-down more vulnerable in terms of the injuries which they can sustain.”

Physiotherapist John Lynch is the lead in the spinal injury unit at the NRH and has treated many cycling injuries over the years.

“We would treat several patients who have been involved in cycling accidents each year,” he says. “There’s the psychological element to recovery but also the physical. Oftentimes it can be very difficult for cyclists who have been injured to realise they are no longer able to do what was once a big passion for them.

“Cyclists are victims of other road users’ negligence oftentimes, and that can be very devastating for the patient when such significant injuries happen,” he adds. “However, we do see a lot of extraordinary patients who want to get as good as they can and they focus all of their positive energy on rebuilding their lives and getting back to their former life.”

Tomorrow: Eamonn McSweeney on recovering from a life-changing cycling accident