Over 556,000 on waiting lists as hospital delays hit new record 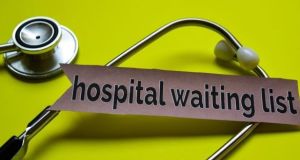 Outpatient waiting lists are up more than 40,000 since the end of last year. Photograph: iStock

Hospital waiting lists have reached another record high, with almost 5,000 additional people waiting for an outpatient appointment in the space of a month.

The outpatient waiting list grew to 556,411 at the end of May, up from 551,965 a month earlier, according to the latest figures from the National Purchase Treatment Fund. The figure is up more than 40,000 since the end of last year, as Fianna Fáil health spokesman Stephen Donnelly pointed out.

The number of patients waiting for inpatient or daycase treatment fell slightly, from 70,295 to 68, 765, thanks to procedures arranged in private and public facilities by the NTPF.

There was also a fall of over 100 in the number of patients waiting for a gastrointestinal test, to 22,113.

However, these reductions were more than offset by the big jump in the outpatient numbers, as well as increases in a number of ancillary lists.

A further 165,000 patients across the country are on waiting lists for ultrasounds, CT scans and MRIs, separately published figures show.

Once again, the NTPF figures reveal a wide variation in the length of lists in different hospitals. For example, more than 20 per cent of people waiting over 18 months for an inpatient procedure are in one hospital, University Hospital Galway. Its 1,102 patients waiting over 18 months compares to a handful in 13 other hospitals, not all of them small ones.

Meanwhile, 10,268 outpatients have been waiting over 18 months for an appointment at the Mater Hospital, almost 10 times the number at nearby Beaumont Hospital in Dublin.

Mr Donnelly pointed out that Minister for Health Simon Harris had said he hoped to stabilise outpatient waiting lists during 2019.

“He didn’t say what this meant but I doubt that anyone could define it as an increase of almost 8 per cent in five months,” the Fianna Fail spokesman said.

“The real concern as ever is for the long waiters, with an even bigger percentage increase – 18 per cent – in the numbers waiting over 18 months. Some 106,145 have been waiting since at least November 2017.

“The words ‘scandal’ or ‘disgrace’ can be overused in politics but I think they are the only words we can use in this situation.

“We have to keep in mind too that when these people finally see a consultant they may also have to wait a long time for any necessary treatment.

“However I am concerned that too many people are still waiting too long for treatment with 10,424 waiting over a year. We need to use the Treatment Purchase Fund as a guarantee of shorter waiting times – it needs to kick in for all patients after a set waiting time as it did during the years 2002 to 2010.”