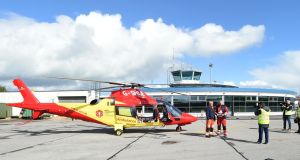 Irish emergency medicine doctors have added their voice to criticisms of the country’s first community-funded air ambulance over the absence of a doctor on board. Photograph: Don MacMonagle/PA

Irish emergency medicine specialists have added their voice to criticisms of the country’s first community-funded air ambulance over the absence of a doctor on board.

The Irish Association for Emergency Medicine says it welcomes the new initiative, to be based in Cork, but is concerned with plans to staff the service with advanced paramedics or emergency medical technicians only.

“This crew configuration will not have the necessary skills or scope of practice to meet the emergency needs of the most seriously ill or severely injured in our communities,” according to the association.

It says a helicopter emergency medical service (HEMS) that meets international best practice should be staffed by a doctor/paramedic team. “This is the accepted model of HEMS staffing in the United Kingdom, mainland Europe, and Australia and is supported by a significant body of scientific evidence showing optimal patient safety and clinical outcomes.”

The service launched last week by Irish Community Rapid Response has already been criticised by a number of Irish and international experts in emergency medicine. In an open letter to the Government, Dr Brian Burns, associate professor of emergency medicine at Sydney university, described the new service as “the Toyota rather than the Rolls Royce of services” because it is not crewed by a doctor.

Rejecting the criticism, the ICRR has said it works with 200 doctors in a voluntary capacity and that staff are provided by the HSE and the National Ambulance Service. Using emergency doctors on an air ambulance service would involve taking staff out of hospitals that are already short-staffed, it has said.

The IAEM says it understands a number of specially-trained HEMS doctors have returned from overseas and are willing to work in the service. “Moreover, a number of trained Irish consultants in emergency medicine and critical care consultants, currently working overseas, may well be encouraged to return home and work in our hospitals with a part-time HEMS clinical commitment.”