INMO claims Government measures were ‘designed to be divisive’ 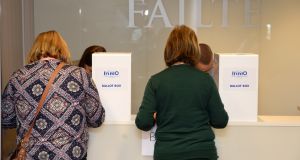 The prospect of strikes or wide-ranging industrial action across the health service has increased significantly after nursing unions urged their members to reject Government pay proposals.

Both the Irish Nurses and Midwives Organisation (INMO) and the Psychiatric Nurses Association (PNA) said on Wednesday if members followed this advice and turned down the pay proposals, they were likely to hold a second ballot on industrial action.

Any industrial action or strikes are unlikely to take place before November.

“I think many delegates felt that Government was pushing them into that position.”

“They felt that that adds to the position they hold that the health service in itself is not important and those who work in it – especially the lowest paid professionals – are not important.”

The Taoiseach Leo Varadkar said on Wednesday that public service staff would receive €400m in pay increases next year as part of the overall public service agreement. He said this was as much as the country could afford.

“There is a point at which if we go beyond that, we either have to take the money out of public services, new schools, new hospitals and away from new medicines or borrow it and then pay later. This is not the responsible approach.”

Ms Ní Sheaghdha said the union hoped to have the initial ballot completed within three weeks.

She said depending on the outcome, union members would then vote again on industrial action, if that was the wish of its executive committee.

The PNA said a special meeting of its executive committee on Wednesday had also decided to urge rejection of the Government’s pay proposals in a ballot.

It said if members rejected the proposals, there would be a second vote on industrial action up to and including strikes.

The INMO had sought an across-the-board pay rise for members to address recruitment and retention problems in the health service to bring their remuneration into line with other graduate-entry grades such as therapists.

However this was not supported by the Public Service Pay Commission which maintained, in a report earlier this month, that there was no generalised problem in recruiting and retaining nurses .

The report recommended increases in a number of allowances for nursing staff in particular areas.

Ministers have said more than 18,000 nurses could benefit from these measures which would cost about €20 million.

Separately the Government maintained that about 10,000 nurses could receive additional money arising from proposals it put forward this week to tackle the long-running issue of public service personnel appointed after 2011 receiving lower pay rates than more longer-serving colleagues.

However while some nurses could benefit from both initiatives, others may not get anything extra at all.

Ms Ní Sheaghdha said the view of the majority of delegates at the conference was the Government proposals would not resolve recruitment and retention issues and could make the situation worse.

She said delegates believed the Government proposals were “divisive and designed to be divisive”.

She said as late as Wednesday morning the HSE was unable to say how many nurses would benefit from certain aspect of the proposals.

“The message from today’s conference was clear. Nurses and midwives are deeply frustrated with our health service. They are the lowest-paid health professionals in Ireland, and many believe it’s because they are mostly women,” she said.

“The Government’s proposals are simply not going to make a dent in the number of vacancies across Ireland. We are calling for members of political parties to stand with us to secure the future of our health service.”

“Without a pay rise across the board, our health service will not be able to recruit and retain the nurses and midwives Ireland needs. That means more overcrowding and pressure on staff, with patients suffering as a result.”

A spokeswoman for the Minister for Health Simon Harris said he noted the positions adopted by the INMO and the PNA.

“The Minister respects the ballot process that they will now take place. The Public Service Pay Commission recommendations will benefit thousands of nurses. The Minister would like to see those proposals implemented.”

Covid-19 and stillbirth: What does the latest research say about possible complications?