Medical Council will meet CervicalCheck women ‘in due course’ 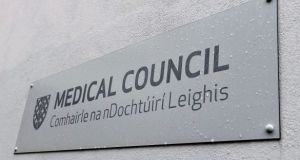 The Medical Council plans to meet some of the women and families involved in the CervicalCheck controversy “in due course”, it has said.

The regulatory body said it is taking the Scally report “extremely seriously” and has plans to address its findings.

Dr Gabriel Scally conducted a scoping inquiry into the failure of the CervicalCheck screening programme and doctors to tell women about a retrospective audit that showed smear tests were incorrectly interpreted, potentially preventing them from receiving earlier treatment. Of the group of 221 affected women, 18 have died.

Dr Scally’s review stated that the Medical Council’s guide for doctors on ethics and professional conduct is not in keeping with a modern, patient-centred approach.

The report found the difficulty with the Council’s guide was that the interests of patients and families were not at the centre of its approach to open disclosure.

In its first substantive response to the review, the Medical Council does not explicitly refer to the issues raised around open disclosure. It said it has held initial discussions and decided on a series of actions to ensure the review is implemented and further improvements are made “in line with the spirit of the report’s recommendations”.

“In due course, once we have detailed our multifaceted approach to the report, we will request to meet with some of the women and families involved and to seek their input and advice while also outlining initiatives the Medical Council will be leading or calling for,” its president, Dr Rita Doyle, said.

“The Medical Council’s Guide to Professional Conduct and Ethics highlights that good communication is central to the doctor-patient relationship and essential to the effective functioning of healthcare teams. Good communication involves listening to patients and colleagues, as well as giving information, explanations or advice,” she said.

“When communicating with patients, a doctor should be honest and give all relevant information. A doctor should welcome questions from patients and respond to them in an open, honest and comprehensive way.”

Dr Doyle said health service providers, regulators, doctors, medical professionals and various key stakeholders must now dedicate themselves to improving patient experiences and care while “working towards an Ireland where no woman, man, child or family have the same experience that the brave women and families involved have had to deal with”.

Dr Doyle added that she strongly encourages the public to continue to attend for screening appointments when invited to do so.

Ireland has higher per capita death ratio than US, study finds