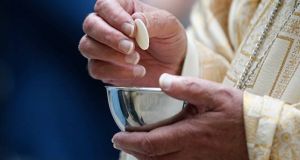 Mass attendees should avoid receiving Holy Communion on the tongue to help prevent the spread of influenza, according to new advice from the Health Service Executive.

The Health Protection Surveillance Centre (HPSC) has said receiving Holy Communion directly on the tongue “should be discouraged” during flu season.

The note said “if it does occur, priests or ministers of the Eucharist should clean their hands using an alcohol-based hand gel.”

handshake involves a low risk of spreading the virus, especially if members of the congregation who are unwell do not go to Mass or church while they are ill.

At the start of the year, a Catholic diocese in Northern Ireland suspended the “sign of peace” handshake during Mass, due to the outbreak of flu.

The notice outlined giving the “sign of peace” during religious ceremonies “may be continued,” but advised priests celebrating Mass to allow attendees use alternatives to the traditional handshake, such as a nod, smile or bow.

However, the updated advisory note said the practice of the priest and church goers shaking hands at the end of the service when departing the church “may need to be stopped temporarily”.

The health warning also said holy water fonts at the entrance of churches required extra upkeep and cleaning during the flu season.

The note said the water should be frequently changed and the font should cleaned thoroughly with washing up liquid regularly.

Other advice offered to parishes was to advise Mass goers not to attend if they have the flu, and for priests visiting the homes of any parishioners infected with the flu to wear a face mask.

The current flu season has been one of the worst in recent years in terms of the number of people who have fallen ill, according to the HSE.

So far 55 people have died from influenza this season in Ireland, the majority of deaths occurring among people aged over 65.

It is expected the peak of the flu has passed.

However, the impact on the health service lags behind the spread of the virus, so the pressure on hospitals is set to continue for weeks.