The State encourages marriage, but I'm not interested in the State's take

Coping: It’s bizarre for the Government to have any role in the union of two people 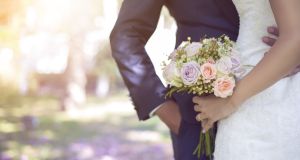 Blurry concept: Most people marry to have a lovely day and exhibit their relationship for friends and family. Photograph: iStock/Getty

“It’ll be you two next. I’ll have to buy a new hat,” an older woman I barely know declared, through a mouth of semimasticated mushroom vol-au-vent, while adjusting her ostentatious hat. We were at a friend’s wedding, and it was a lovely day. Even the vol-au vents. They may be considered a naff remnant of the mouldering aesthetic of the 1970s, but I rather love them.

I was less enchanted by the woman’s comments. After pointing out how “modrin” she is, she declared that we should probably get married post-haste, before people start to wonder. I’m not entirely certain what they might begin to wonder, but I presumed it was something along the lines of my being incapable of catching a man, or that my womb is actually full of live eels, or that my partner has a secret family overseas. He is, she concluded, a grand tall young fella.

One of my favourite things is watching my partner, Jules (who is mixed race, enormously tall and rather handsome), charm older Irish women. I watch their long-standing racism fight against his good looks and pathological friendliness. They always end up deciding that he’s delightful, usually in tandem with pretending he isn’t really a person of colour – “Sure he could be Methitherranean, like.”

All around us friends and family are getting hitched and having babies. It isn’t that anyone really cares if we get married, but there are times when you feel the judgment

We have been together for almost four years, and all around us friends and family are getting hitched and having babies. Of course it isn’t that anyone really cares whether we get married. But there are those occasions when you feel the judgment. At weddings, or when someone calls to tell you that their daughter Mairéad passed her accountancy exams and is pregnant and then asks you how your career is going, and the word “careeeer” is drawn out like death by arsenic.

I’m not precisely against marriage if the other party is willing. It provides important protections and benefits, along the lines of inheritance, property and, particularly, men’s rights to their children, if children are involved.

But marriage is a much blurrier concept than it used to be. Most marriages in Ireland now are secular, by which I mean not that they take place outside of churches but that most people don’t really believe. Mostly (and thankfully) they have lived together before marriage. They don’t really think that the pope is infallible, or that the Communion wafer is a chunk of Jesus, or that the Bible should be interpreted literally. Most people marry to have a lovely day, to exhibit their relationship for friends and family, and to gain the validation of the State.

Therein lies my primary issue. Why should we have to have our relationship validated by a faceless State? It is extremely odd for the State to have any role in the union of two people as they make a promise to stick together for as long as they can bear to. I like the concept very much of making a sincere promise to the person I most trust and value, but the idea that I need a licence from a form-stamper and will gain tax benefits seems bizarre. The State incentivises marriage for stability and procreation, but I’m not very interested in the State’s take on who I spend my time with and in what manner.

There is the public version of marriage and the private version, which is just the two of you every day trying, and often failing, to be good to one another

There is the public version of marriage – for joint bank accounts and taxes and mortgages – and the private version, which is just the two of you every day trying (and often failing) to be good to one another. This version looks identical to committed unmarried couples. It is simply easier for others to identify what is going on between them when there are rings and a piece of paper.

I haven’t made up my mind about marriage yet (I’m not crumbling under the weight of offers), but I never sat as a child and dreamed of a dress and a party and a faceless man one Saturday afternoon in June or July. No. I staged wrestling matches between Barbies and WWE wrestling figurines. And I dreamed of vol-au-vents.