E-cigarettes likely to increase number of smokers who quit 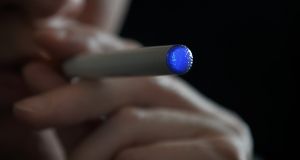 “While the long-term effects of using e-cigarettes have not yet been established, data from Healthy Ireland reveals that 29% of smokers currently use e-cigarettes as an aid to quitting smoking.” Photograph: Anthony Devlin/PA Wire

Greater uptake of e-cigarettes by smokers is likely to increase the number of people who successfully give up smoking, according to an independent analysis of health interventions.

A health technology assessment (HTA), published by the Health Information and Quality Authority (Hiqa) on Thursday, is the first in Europe to examine the cost effectiveness of e-cigarettes. It was carried out on foot of a request from Dr Fenton Howell, the national tobacco control adviser at the Department of Health.

The agency’s director of health technology assessment, Dr Máirín Ryan said: “This HTA found a high level of uncertainty surrounding both the clinical and cost-effectiveness of e-cigarettes. While the long-term effects of using e-cigarettes have not yet been established, data from Healthy Ireland reveals that 29 per cent of smokers currently use e-cigarettes as an aid to quitting smoking.

“Hiqa’s analysis shows that increased uptake of e-cigarettes as an aid to quitting would increase the number of people who successfully quit compared with the existing situation in Ireland, and would be cost-effective provided that the currently available evidence on their effectiveness is confirmed by further studies.”

The report found that the most cost-effective quit strategy is to maximise the combined use of the drug varenicline and nicotine replacement therapy (NRT). Varenicline is a prescription-only medication which helps people to stop smoking by reducing withdrawal symptoms and reducing the satisfaction that can be gained from smoking. NRT is available in a number of formulations, including skin patches and inhalers.

If e-cigarette use in Ireland rose to maximum levels currently reported in England (45 per cent), and smokers choose this option without seeking medical advice, the number of prescriptions required could fall by nearly 40 per cent, the report notes.

“Given the increasing use of e-cigarettes it is of vital importance that their potential benefit and harms continue to be discussed with smokers to ensure informed decision-making in relation to their use,” it says.

The Irish Vape Vendors Association welcomed the publication of the health technology assessment, noting its acknowledgment of the wider public health potential of tobacco harm reduction through smokers switching to vaping.

Approximately 20 per cent of deaths each year can be attributed to smoking, including deaths due to second-hand smoke.

A public consultation seeking feedback on the report is open until February 3rd, 2017. Following this, a final report will be prepared for consideration by the Hiqa board, before being submitted to the Minister for Health and the HSE.

The report, along with details on how to take part in the consultation, is available at www.hiqa.iewww.hiqa.ie.