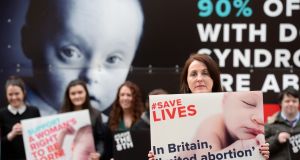 Niamh Uí Bhriain, of Save the 8th Campaign, including new Disability Voices for Life group, at the launch of national billboard message in Dublin. Photograph: Dara Mac Dónaill

It was disgusting and extraordinary to describe the use of a Down syndrome boy for political purposes as child abuse, anti-abortion campaigners have said.

The “Save the 8th” group on Tuesday held a press conference in Dublin to highlight a billboard campaign opposing the potential liberalisation of the State’s abortion laws. It features Joseph Cronin, who has Down syndrome.

Niamh Uí Bhriain, of the Life Institute, said it was “extraordinary that anybody in the media or any campaigner would use the phrase ‘child abuse’ towards a parent who wishes to include their children and their families in this campaign.

“We have every right to put a human face to the horrible statistic that is coming out of so many countries such as Britain, where 90 per cent of children (with Down syndrome) are being aborted.”

Anne Trainer, whose son Kevin has Down syndrome, said it was “disgusting” to suggest such a thing.

“I am Kevin’s advocate. He can’t speak for himself. I have to speak out for him. This is his community we are talking about. It’s being wiped off the face of the earth. If I don’t speak up for him who will?”

Down Syndrome Ireland last week appealed to all sides in the debate to “stop exploiting children and adults with Down syndrome to promote their campaign views”.

Ms Uí Briain accused Taoiseach Leo Varadkar of “dressing cruelty up as compassion” when announcing a referendum would be held. She accused Minister for Health Simon Harris of having “ignored completely” the “humanity and rights of the pre-born child.”

Asked how it was possible to have a respectful debate on the issue when she was so personal in her attacks on people and combative in her language, Ms Uí Bhrian said: “I don’t think it is disrespectful to describe Leo Varadkar’s proposal as being cruel and unjust because that is precisely what it is.”

She believed “sincerely what Leo Varadkar and Simon Harris are doing is turning their back on the women of this country, saying that ‘we won’t give you the compassion and support you need, we’re just going to offer you abortion instead.’ I have every right to call them out on that without being accused of being combative,” she said.

As to whether the only sincerity was in the debate was on her side, Ms Uí Bhrian said: “No. I believe that Leo Varadkar for example was pro-life four years ago and he has shifted his position and most politicians, I’m afraid, shift their position for political reasons.”

Politicians, she said “are very often not people of great conviction”.