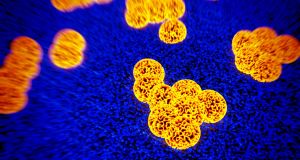 World Health Organisation: “Antibiotic resistance is growing and we are fast running out of treatment options.” File photograph: Getty Images

The 12 drug-resistant superbugs that pose the greatest threat to human health have been identified in a list published by the World Health Organisation (WHO).

The global health organisation’s first ever list of “priority pathogens” has been drawn up to promote research into new treatments to tackle the growing problem of antibiotic resistance.

The list is headed by three families of bacteria of “critical” importance – Acinetobacter, Pseudomonas and various Enterobacteriaceae – that pose a particular threat in hospitals and nursing homes, where they can cause bloodstream infections and pneumonia.

The list highlights the danger posed by gram-negative bacteria that are resistant to multiple antibiotics. These bacteria have built-in abilities to find new ways to resist treatment and can pass along genetic material that allows other bacteria to become drug-resistant also.

“Antibiotic resistance is growing and we are fast running out of treatment options. If we leave it to market forces alone, the new antibiotics we most urgently need are not going to be developed in time,” said Dr Marie-Paule Kieny, WHO assistant director-general for health systems.

The second and third tiers in the list – high and medium priority categories – contain other increasingly drug-resistant bacteria that cause more common diseases such as gonorrhoea and food poisoning caused by salmonella.

Tuberculosis, although showing greater drug-resistance in recent years, was not included on the list because it is targeted by other programmes. Other bacteria such as streptococcus A and B and Chlamydia, were not included because they have low resistant to existing treatments.