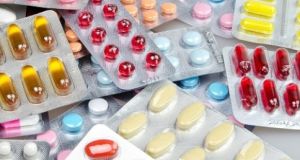 Hiqa has found evidence of under-reporting of mistakes with medication, non-reporting of near misses in drug administration and outdated reference materials. Photograph: Getty

Wide variations in the arrangements hospitals make for medication safety have been identified in a series of reports by the Health Information and Quality Authority.

The first announced inspections on the issue have found evidence of under-reporting of mistakes, non-reporting of near misses in drug administration and outdated reference materials.

The authority said all seven hospitals inspected have scope for further improvement but some are well organised to ensure safer use of medicines for patients.

The report on University Hospital Waterford says medication-related clinical incidents were probably under-reported and the hospital lacks essential governance arrangements in this area.

The hospital has since appointed a medication safety pharmacist.

An immediate high-risk was identified at Bantry General Hospital over instructions for administering intravenous medications that could be incorrect.

The hospital was found to have reported a low number of medication errors and near misses relative to other hospitals.

Issues were also identified at the Mid-Western Regional Hospital at Nenagh and Connolly Hospital, Blanchardstown.

The inspections were carried out late last year in hospitals at Bantry, Blanchardstown, Naas, the Mater, Sligo, Nenagh and Waterford.

Sean Egan, acting head of healthcare regulation at Hiqa, says errors associated with medication is one of the major causes of patient harm in hospital.

Learning from hospitals that have more advanced medication safety programmes in place should be shared nationally, he recommended.

However, some hospitals lack the necessary resources to promote greater safety in the use of medicines, he says.