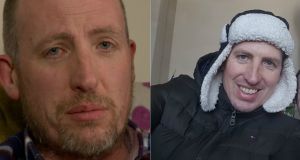 Before and after: Following a rigorous course of intravenous and oral antibiotics for nine months at the Jemsek Speciality Clinic in Washington DC, Anthony Morris says he now feels ‘freakishly well’

An Irishman who underwent controversial antibiotic treatment in the United States for an insect borne disease claims that bacterial illnesses caused by insect bites are underdiagnosed in this country.

Former Kerry footballer and civil engineer, Anthony Morris (42) flew back to Ireland on Sunday after nine months of antibiotic treatment for Lyme disease and other co-infections at a private clinic in the United States.

“The treatment was very successful but I was exceptionally sick throughout. Within four days of finishing the intravenous antibiotics, I was walking about. By day five, I had no pain. I felt so good that I could have played a game of football,” said Morris who had been wheelchair and bed-bound at times over the last nine years.

After suffering from severe migraine, chest pains and other debilitating symptoms put down to chronic fatigue syndrome, Morris was diagnosed with Lyme disease and co-infections in 2015.

The diagnosis was confirmed as an infectious disease in Germany, following negative test results in Ireland.

He firmly believes that Lyme disease and other bacterial co-infections caused by tick bites are more common in rural Ireland than people realise.

“Lots of people in Kerry have symptoms of it but have received negative test results in Ireland.

“Fifty per cent of park rangers have had Lyme disease at some stage. We have to keep talking about it because doctors want to keep it hushed up. 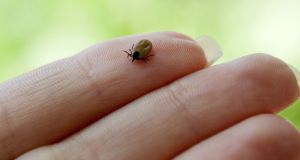 Lyme disease The tiny tick that packs a huge punch

“People can’t be left to suffer in silence and get worse over time.”

Lyme disease is most common in mountainous and woodland areas where ticks are prevalent.

Following his own research into treatments for chronic Lyme disease, Morris opted to move to the United States with his partner, Margaret McCormack and his daughter, Roisin.

“I went to an infectious disease specialist in Ireland before we left. She offered me 3-4 weeks antibiotic treatment and was dismissive of our decision to travel to the US for longer treatment,” he said.

Now, following a rigorous course of intravenous and oral antibiotics for nine months at the Jemsek Speciality Clinic in Washington DC, he says he feels “freakishly well”.

His family raised the $90,000 cost of treatment and accommodation through an online fund-raising campaign. McCormack was also trained to administer Morris’ intravenous antibiotics while there.

Dr Jemsek, the infectious disease specialist who treated Morris said, “while I love patients who make the sacrifice to come [here] from Europe - and I will do all I can to assist them, it is sad that so many have to travel so far to get help.”

Dr Jemsek, who became an expert in Lyme Disease after treating HIV/Aids patients, is an outspoken critic of a medical system in which some doctors undermine patients with undiagnosed conditions.

“We really have been corrupted and manipulated into accepting a definition of medical ‘care’ that prevents time to listen and learn from our patient.

“If we don’t know what’s wrong with the patient, we tend to blame the patient,” he has said.

Anthony Morris will continue to take oral antibiotics for four months and will return to the Jemsek Clinic for annual check ups.

Tuesday’s Health& Family supplement will feature an article about Lyme disease, how a tiny tick can pack a huge punch.