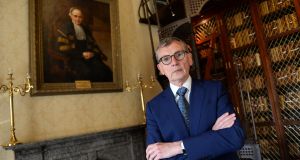 Dr Gabriel Scally, who is carrying out a scoping enquiry into the CervicalCheck screening programme, said most records requested by him only landed on his desk at the end of last week. Photograph: Dara Mac Dónaill

The whole CervicalCheck imbroglio has been dominated by failures and delays to disclose, whether it is information about erroneous smear tests or records sought by a Government investigation.

It is remarkable that, six weeks after it emerged that scores of women were not told about audits revealing incorrect tests, the healthcare expert appointed by Minister for Health Simon Harris to get to the bottom of the scandal has been delayed because of late and inadequate disclosure of records.

In Dr Gabriel Scally’s first progress report on Tuesday, the Northern public health veteran said most records requested by him only landed on his desk at the end of last week, almost a month after Mr Harris said “a full discovery will be undertaken and all documents will be made available to the scoping inquiry”.

The documents were voluminous in number – more than 4,000 – and in hard copy format.

Some documents were in a searchable electronic format when very recently created, but they arrived as scanned, printed and unsearchable copies.

He described this as “disappointing” in his report and declared himself “cross” on radio and called the situation “unacceptable”.

“It is almost impossible to conduct an inquiry dealing with thousands and thousands of files without being able to search the documentation,” he told RTÉ’s Drivetime on Tuesday.

The HSE has said that, given the short timescales, it was “trying to ensure documents were issued as quickly as possible”.

The treatment of Dr Scally is consistent with the attempts by lawyers for some of the 209 affected women – 18 of whom are dead – to obtain medical records and smear test slides from CervicalCheck or the US labs that did the testing.

It is also in line with how Oireachtas committees have been drip-fed information and paper-bombed with documentation hours before officials are due to face TDs and Senators, giving them little time to read and prepare.

Talk got tougher on Wednesday. Mr Harris called the HSE’s actions “pathetic”. From the Dáil, Taoiseach Leo Varadkar warned that if State agencies obstructed Dr Scally, “they are also obstructing the Government”.

“The culture is to hide from, not to give information to, patients and to give information slowly,” said Cian O’Carroll, the Tipperary solicitor who represented Vicky Phelan, the terminally ill Limerick woman whose court case and act of open disclosure exposed this scandal.

The expected end-date of Dr Scally’s investigation has slipped by two months, pushing back the follow-up commission of investigation, which now seems to have become a possibility rather than a certainty.

That is a delay that some of the affected women fighting cervical cancer cannot afford.