Likely businesses will remain shut ‘until the end of March’, says Varadkar 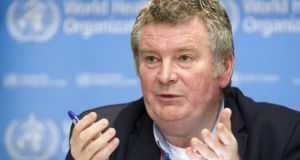 Ireland and other countries could be “in serious trouble” if new variants of Covid-19 “change the rules of the game” in terms of preventing transmission, Dr Mike Ryan has warned.

The head of the emergencies at the World Health Organisation, who is Irish, said he was concerned that people were not “sustaining the things we need to do at any level” as the pandemic progresses, when new variants that are more transmissible could change the rules of infection prevention.

Ireland did exceptionally well twice during the pandemic, he told an online conversation hosted by the Royal Irish Academy on Thursday. “Irish people, Irish science, the Government, they all came together and you nailed it.” While case numbers have increased since, Dr Ryan said he believed Ireland could turned things around, though it would take a concerted effort.

People have become “numbed” to the numbers involved in the pandemic, he said, pointing out that the figure of 2 million deaths will be passed in the coming days.

Dr Ryan said the world was facing into “headwinds” as a result of “perfect storm”. With cold weather driving people indoors, and a lot of social mixing taking place over the holiday season, the emergence of variants was adding to the complexity of the task.

Ireland and Britain were facing into having to deal with new variant when transmission of the virus was already very high, placing them in a “difficult situation”.

“People have lost a sense of what they can do to stop the disease” as a result of tiredness, he said and public health behaviour had broken down.

Calling for sustainable solutions to the challenges posed by the pandemic, Dr Ryan said humans had become “parasites” on a “fragile” planet, destabilising an ecosystem that has sustained them for hundreds of thousands of years.

He said he was “ashamed of the planet we’re handing on to our children” but also filled with hope as a “pathological optimist”.

He also paid tribute to the “outstanding” work of the National Virus Reference Laboratory in UCD, saying they had “led the way” in genetic sequencing of the virus to identify new variants.

Meanwhile on Thursday, Tánaiste Leo Varadkar has said it is likely businesses that are currently closed will remain shut “until the end of March”.

The current situation in acute hospitals was now “very grave” and “very precarious”, he told Newstalk’s The Hard Shoulder.

Mr Varadkar, who worked as a doctor before entering politics, said he would be available to help administering Covid-19 vaccines in the coming weeks.

“I’ve said to the HSE that I am available to help with the vaccine clinics if they need me,” he said. “I am part of a group of 150 or so non-practising, retired GPs that are willing to do it, they don’t need us yet because there aren’t enough vaccines in the country, but we might get to that point in the next couple of weeks,” he said.

From next week onwards there will be around 50,000 vaccine doses administered a week. This will ramp up to between 100,000 and 150,000 a week after the AstraZeneca vaccine receives regulatory approval in Europe and supplies begin to arrive, he said. He said it was expected it would receive European Medicines Agency approval at the end of January.

Any easing of strict lockdown restrictions in the coming months would be “very gradual,” Mr Varadkar said.

“I don’t think we, as a Government, or as a society want to risk opening up again as quickly as we did in December,” he said.

The number of Covid-19 patients in intensive care would need to fall below 50, alongside low numbers of daily cases, and a “critical mass” of vulnerable people vaccinated, before the Government moved to ease restrictions, he said.

The priority would be to have schools reopen, followed by construction sites, and then some outdoor retail stores, he said.

It was likely that the majority of businesses that were currently closed would remain shut until at least the end of March, he said.