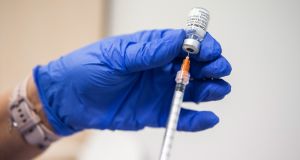 A dose of the Pfizer-BioNTech vaccine. Photograph: Lukasz Sokol/Bloomberg

The HSE has responded to a Dáil claim that staff at a childcare provider were inoculated for Covid-19 out of sequence, insisting that “vaccinations are being carried out in accordance with guidelines and regulations”.

It came as HSE chief executive Paul Reid separately said the organisation was working with GPs to address supply “issues” that had arisen in recent days in relation to vaccines.

There have been some complaints by GPs and politicians claiming late delivery of vaccines or changes in delivery times.

He said that, “alarmingly”, his colleague Brendan Howlin told him about a childcare provider in Wexford that “possibly [put] some pressure on the HSE” and “has actually got all their staff vaccinated”.

He also highlighted concerns raised by Mayo GP Dr Keith Swanick, who has said a neighbouring GP got 420 vaccines while he and another doctor got none.

Mr Kelly said: “We cannot have such anomalies happening. It’s not equitable.”

Mr Reid was asked about the alleged incident in Wexford at the HSE’s weekly press conference on Thursday.

He said “many checks and controls” had been put in place to prevent people being vaccinated outside the order of prioritisation.

Mr Reid added: “If something like that has happened, we’ll be more than happy to investigate it.”

On Thursday night a spokesman for the HSE’s South East Community Healthcare network said: “Vaccinations are being carried out in accordance with guidelines and regulations.”

He said rollout in the region had included residents and healthcare staff in nursing homes and other care centres; staff in community healthcare services; staff employed in Section 38 and 39 agencies supported by the HSE; and patients aged over 85.

He did not respond to a further query on whether the staff vaccinated could include childcare workers.

Separately, the Dáil heard a claim by People Before Profit TD Bríd Smith that vaccines for more than 100 people had not arrived in the Dublin suburb of Ballyfermot.

Meanwhile, Mr Reid said there was “a lot of discussion going on” about issues that had arisen, particularly in the past 48 hours and relating to rural GPs. He described the process as “complex”.

The HSE said it had set up a support team to help GPs place their orders and “understand delivery arrangements”.

The HSE and the Irish Medical Organisation were working with a small number of practices to identify “solutions” for their patients, it said.

Some GPs may have been expecting deliveries this week that are actually due next week, Mr Reid suggested.

Over-85s are being vaccinated in a three-week period, starting with GP surgeries with the largest number of patients in this this age cohort, according to Dr Denis McCauley, chairman of the GP committee of the IMO.

Larger practices are being supplied in the first week, medium-sized practices in the second (this week) and smaller ones in the third, he explained.

“There is no blanket bombing of any one area. Generally, when they get vaccines depends on practice size.”

Only practices requiring more than 200 doses for over-70s are getting individual deliveries; smaller surgeries are supposed to group together with neighbours to receive supplies.