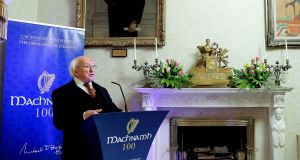 Irish people were “willing agents” and often “enthusiastic accomplices to the excesses of colonialism”, President Michael D Higgins has suggested.

Those who participated in the British Empire sometimes did so out of economic necessity, but also because of the personal benefits colonialism has brought, he said.

Speaking at the second of his Machnamh gatherings exploring the decade of centenaries, Mr Higgins said the Irish had been a colonised people for hundreds of years.

He questioned whether the depictions of the Irish as “lesser, violent, drunk, indolent, backward” in Punch magazine in the 19th century had really been erased.

“Are there residues of post-colonial inferiority in attitudes to the Irish language and wider Irish culture? Do the terms so often used as something being ‘very Irish’ or even that on occasion decisions are described as ‘an Irish solution to an Irish problem’ reveal a residual belief that a description of being Irish is synonymous with being lesser?”

“In all of this, there is the grounding fact of humiliation, inflicted, experienced, recalled, remembered or imagined. The psychological impact of the cultural imperialism that was experienced over the centuries in Ireland was perceived as a deeply ingrained urge to humiliate.”

Colonialism was rooted in a notion of cultural superiority and any ideology that threatened empire had to be confronted, he believed.

That superiority explained the reprisals carried out against the civilian population in Ireland by crown forces in Balbriggan, Cork and during Bloody Sunday. It began in September 1919 with the burning of Fermoy in response to the killing of Private William Jones, the first British soldier killed in the War of Independence.

It was also manifest in the attacks on creameries – which were major employers and sources of essential foodstuffs – starting with the attack on Tubbercurry local co-operative creamery on September 30th, the President said.

By the time a truce between the IRA and the crown forces came into effect, 40 co-operative creameries had been destroyed, with another 35 rendered unfit for work. The destruction of each creamery put an estimated 800 farmers out of business.

Giving the keynote address, Prof John Horne of Trinity College Dublin (TCD) said the Irish State emerged in the aftermath of the first World War which had seen the dissolution of so many dynastic empires into separate nation states.

“Nationality did not always imply statehood. Nations might exist inside a state or an empire. If a nation became a state, who belonged to it? How did it assert its sovereignty?” he said.

Ireland was a laboratory for such ideas. The Irish War of Independence had unique attributes, but it was also a part of a “greater war” in Europe, he said.

“The Allies tried to make a Europe of nation-states but they did so in a world still in flames. Their writ was limited by wars, national revolutions, counter-revolutions and the world threat of Bolshevism. For example, the Poland they decreed ended up twice as big after wars with Lithuania, Ukraine and Russia. Ireland’s War of Independence (and Civil War) were part of this ‘greater war’. A century ago, Ireland shared a specific European context.”

Prof Horne said the Irish War of Independence was the first war of decolonisation since the American war of independence.

It was part of a process (including Palestine, India, Malaya, Kenya) that lasted until the 1960s.

“I wonder if the UK has yet come to terms with this side of empire, its violence, and in particular that of decolonisation,” he stated.