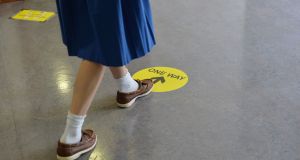 A recent snapshot survey carried out by the ASTI found a quarter of secondary schools didn’t have warm water while more than eight out of 10 had poor ventilation. Photograph: Alan Betson

Teachers with underlying health issues, who are worried about the risks of returning to teach children and young adults, need further reassurance that all possible measures are being taken to ensure their safety, the Association of Secondary Teachers (ASTI) has said.

Speaking on Monday as hundreds of primary and secondary schools around the country reopened their doors to students for the first time in nearly six months, ASTI president Ann Piggott warned that many educators remained deeply concerned about the spread of Covid-19 in school settings.

A recent snapshot survey carried out by the teachers’ union found a quarter of secondary schools didn’t have warm water while more than eight out of 10 had poor ventilation, she said. The union has also heard of teachers correcting copy books and eating lunches in their cars in recent days because staff rooms were no longer available, she added.

“Teachers want to be back in school but we need to ensure funding so that buildings can cope with changes while students who must stay home have access to wifi and a computer. Teachers now have to move from room to room and they’re telling us they want a Perspex screen around their desk. We would also like to see temperature checks and fast-tracked testing in schools.”

Some teachers remained very worried about their health, said Ms Piggott who has spoken to cancer survivors and one teacher who had a lung removed. “Teachers who are in very high-risk groups are in some cases being forced back into work without clarification on support from the HSE,” she said.

Teachers’ Union of Ireland (TUI) general secretary Michael Gillespie said some older teachers, who under normal circumstances would have remained in their jobs a few more years, were retiring early rather than risking contracting the virus. Those with vulnerable family members at home were also concerned about carrying Covid-19 from the school to their loved ones, he added.

Mr Gillespie said he expected “lots of teething problems” over the coming weeks as schools adjust to new practices and he hoped to see rapid Covid-19 testing introduced for teachers as soon as possible. However, he said he had “huge confidence” in young people’s awareness of the gravity of the health situation.

Pairic Clerkin, chief executive of the Irish Primary Principals’ Network (IPPN), said feedback from members in recent days revealed “a great relief” that schools were back open. Mr Clerkin paid tribute to the principals who gave up their summer holidays to ensure schools were ready for the students’ return.

Asked to comment on social media reports of large crowds of parents and students gathering at school gates for drop-off and pick-up, Mr Clerkin said schools needed a few days to settle into a routine but the vast majority of parents were “very aware and supportive” of social distancing measures and the use of face coverings.

Hugh Cronin, principal of St Catherine’s National School in Ballymoe, Co Cork, said he had received “100 per cent positive feedback” from parents and staff since the school reopened last Thursday, describing the opening as “a joyous occasion”.

Mr Cronin, who worked 12-14 hour days through the summer to ensure the primary school was ready for its 116 students, said the start of the school year “actually felt like getting my summer holidays”.

“Work was relentless before that,” he told The Irish Times. “We’ve all been learning from this and it comes down to mutual respect. It’s been a huge cultural change for the school but the children have accepted it straight away. It’s been about keeping the lines of communication open. We want to be sure our staff feel safe and comfortable in the school too.”