Nearly 400 active outbreaks of coronavirus in the Republic

Over 250 of the outbreaks relate to social gatherings in private households, says HPSC 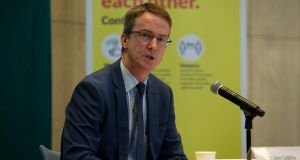 There are nearly 400 active outbreaks of coronavirus in the country at present, according to officials from the Health Protection Surveillance Centre.

Dr John Cuddihy, director of the HPSC, which monitors and analyses the number of Covid-19 cases in the State, said officials were seeing a “significant number of outbreaks” at present.

There are 392 active outbreaks of the virus in the State at present, 252 of which were related to social gatherings in private households, he said.

One recent outbreak in a pub/restaurant had been linked to 26 cases, which then spread further causing 10 cases in another workplace. Another outbreak in a restaurant involved 19 cases, Dr Cuddihy told a press briefing on Thursday.

Six cases had been traced to an outbreak in a sports club, with further transmission at an associated social gathering resulting in another 19 cases.

He said an outbreak in a retail outlet had seen seven staff contract the virus, as some of the workers continued to work while showing symptoms.

There were 93 new cases of coronavirus reported on Thursday, and no new deaths, according to the National Public Health Emergency Team (NPHET).

Dublin has the highest number of new cases at 34, while there are seven in Kildare, six each in Donegal and Laois, five each in Limerick and Waterford, with the remaining 30 cases spread over Carlow, Cavan, Clare, Cork, Louth, Meath, Monaghan, Offaly, Tipperary, Westmeath and Wicklow.

Speaking on Thursday, Prof Philip Nolan, chair of NPHET’s modelling group, said the R-number – the reproductive rate of the virus – was between 1 and 1.2. While current estimates were uncertain, this meant coronavirus was continuing to spread in the community.

He said health officials were also “beginning to see a small but significant increase in the number of people in hospital”. At present there are 29 confirmed coronavirus patients in hospital, with five in critical care units.

He said the number of new cases had grown sharply in early August, with “rapid transmission of the disease in large outbreaks in a number of settings” .

The disease had spread from those workplace outbreaks and clusters into the community. “It moved from large workplace settings to smaller family and social outbreaks.”

Prof Nolan said the rate of community transmission “appears to be stable at the moment but higher than we would like it to be”.

Dr Ronan Glynn, the acting chief medical officer, said he would not expect to see a “downward trend just yet” of new cases, following limits on gatherings introduced last week. “In the first instance we need a national focus over the next two weeks in getting the case numbers down.”

At a meeting on Thursday NPHET decided against recommending any early easing of local lockdown restrictions in Co Kildare, due to expire at the end of next week.

NPHET also decided against recommending that pubs that do not serve food can reopen on Monday.

In Northern Ireland one more person with coronavirus has died, while 69 new cases of Covid-19 have been identified .

The North’s Health Minister, Robin Swann, said he was concerned some licensed premises were “flouting” the coronavirus guidelines, and he intended to ask the Executive to “prioritise stronger legislation” to address it.

He was speaking after footage emerged showing guests dancing at a wedding, contrary to the guidelines.