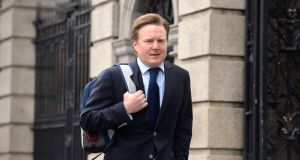 Testing people for Covid-19 using saliva samples is under examination by public health officials, who are also considering pooling samples as a way of meeting the rise in demand for testing.

Any immediate adoption of rapid testing for the virus is unlikely, due to shortcomings in the products currently available, he indicated.

The standard PCR (polymerase chain reaction) testing used in processing thousands of Irish samples daily will continue to be “the gold standard”, though alternatives are being investigated.

Dr de Gascun said many of the companies developing rapid tests for Covid-19 are “making great claims” and engaging in “science by press release” but “there’s very little behind it”.

Testing saliva samples, though less sensitive, would be less unpleasant for the patient

While some have called for mass testing of the population, he says this could lead to the system being “swamped” with up to 100,000 false positives*, due to the limitations of the process.

Public health officials are looking at alternative ways of taking samples to the nose and throat swabs currently used, which some people find uncomfortable.

Testing saliva samples, for example, though less sensitive, would be less unpleasant for the patient.

“If it works well we’ll look to introduce this for children, and for serial testing where people have to undergo repeat swabs,” said Dr de Gascun.

The testing service is no longer as dependent on individual suppliers as it was in the spring, when there were delays due to shortages of reagent and other key materials used in the process.

Officials are also “actively exploring” the use of pooled testing, given the rise in referrals in recent weeks, he says. This would see people in a factory or other location pool their samples for testing. A positive result would trigger individual testing, while a negative would allow testers to move on to priority cases.

Dr de Gascun warned the winter will be “challenging” due to supply issues and rationing of materials by suppliers.

Details of the long-promised reorganisation of the service will be announced soon, he says, and will involve a move to a more permanent structure and an expansion to seven-day services.

The role of the GP in referring people for testing is also under examination, amid calls for an online referral system for tests to speed up the process.

“We want to improve access and remove barriers, but we need to be careful about taking GPs out of the process,” he cautioned. “GPs carry out clinical assessments, so would we get the same level of support in a drive-through service?”

Dr de Gascun said “we’re not there yet” in the development of faster testing systems that could process large numbers of swabs taken in the community.

A test doesn’t cure you. It’s only one piece of information and it’s not perfect

The development of antigen tests, which look for virus proteins and could work in a way similar to a pregnancy test, has been mooted.

“Companies are developing these tests but to date there is no great peer-reviewed evidence for them. If antigen testing was as good as some claim, we’d be using it for other things, but we’re not. It sounds attractive but may not be as sensitive as PCR.”

Dr de Gascun said he finds it “entertaining and frustrating that people on both sides are complaining” to him. “We’re told PCR misses one in five infections, but on the other hand they want me to move to something worse.”

Regardless of test results, people with symptoms should stay home, he pointed out. “A test doesn’t cure you. It’s only one piece of information and it’s not perfect. I don’t want people to lose faith in testing but we’ve imbued it with more power than it has.”

The most promising alternative for speeding up testing may lie in a technology known as loop-mediated isothermal amplification (Lamp), which can deliver results in 60 minutes and be scaled up to process large volumes of tests.

“Lamp is attractive, but the problem is that no one is using it. It’s been coming for a while but doesn’t seem to have arrived.”

*An earlier version of this story incorrectly stated 6.5 million rather than 100,000 false positives