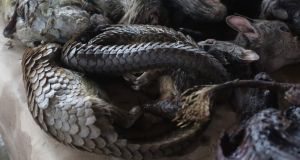 Nature’s research suggests pangolins are ‘a second mammalian host of coronaviruses and that their sale in wildlife markets should be strictly prohibited to minimise the risk of . . . virus transmission to humans. Photograph: Getty

Coronaviruses detected in a small number of pangolins smuggled into China were shown to be closely related to Covid-19, according to research published on Thursday.

The degree of similarity is insufficient to suggest pangolins are the intermediate hosts directly involved in the current Covid-19 outbreak – bats are believed to be the original source of the virus.

The findings published in the scientific journal Nature, however, suggest the animals are “a second mammalian host of coronaviruses and that their sale in wildlife markets should be strictly prohibited to minimise the risk of future virus transmission to humans”.

“Although evidence that bats may be the likely [initial] reservoir for Sars-CoV-2 (the medical term for the virus) the identity of intermediate host animals that could have facilitated the transfer of this virus into humans remains unknown,” stress the authors.

One possible host is pangolins, which are the most-commonly illegally trafficked mammal and are used as food and in traditional medicine.

In December the “wet market” in Wuhan linked to early cases of the recent outbreak of respiratory disease was cleared out shortly after the outbreak began, which has impeded the search for the animal species that is the source of coronavirus, they note.

Meat, poultry, and seafood are sold at wet markets alongside live animals for consumption – a subsequent study concluded the outbreak occurred elsewhere but the market boosted its circulation and spread it to the whole city.

A team led by Dr Yi Guan at the University of Hong Kong analysed samples taken from 18 Malayan pangolins that were obtained from anti-smuggling operations in southern China between August 2017 and January 2018.

The viruses isolated from these samples have a genetic sequence similarity of approximately 85 to 92 per cent to Sars-CoV-2. And one virus shows strong similarity in the sequence of the receptor-binding domain – a region that genetically encodes what is known as the “spike” of the virus that facilitates entry into host cells.

However, all of the pangolin coronaviruses identified to date lack a specific alteration (mutation) in their sequences that is seen in human Sars-CoV-2, they conclude, which places uncertainty on their role in the transmission of the novel coronavirus into humans.

Pangolins are the only mammals other than bats reported to date that have been found to be infected with a Sars-CoV-2-related coronavirus. “These findings highlight a potentially important role for pangolins in the ecology of coronaviruses, but do not directly implicate pangolins in the transmission of Sars-CoV-2 to humans,” say the authors.

Handling these animals requires caution while further monitoring of pangolins is needed to understand their role in the emergence of coronaviruses with the potential to infect humans, they suggest.