Retailer is losing net sales of €700m a month during crisis 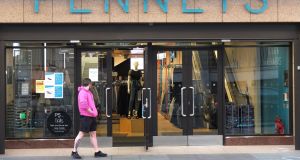 Primark, which trades as Penneys in the Republic, is withholding rent payments here, it confirmed. Photograph: Nick Bradshaw / The Irish Times

Penneys is withholding rent on its 37 stores in the Republic as part of a wider move by the clothing retailer to suspend payments to landlords during the coronavirus crisis.

“These are exceptionally difficult times and, like many retail businesses, we are looking closely at options to mitigate the significant impact of lost sales due to the Covid-19 outbreak,” said a spokeswoman for the company, which trades outside the Republic as Primark.

“Given that all our stores are closed for the foreseeable future, we are asking our landlords to support us by agreeing terms that will help offset some of the impact.”

The shutdown is costing the retailer about €700 million a month in lost revenue.

“We hugely value our relationships with our landlords and we look forward to resuming our normal trading relationships as soon as possible when our stores reopen,” the company’s statement concluded.

The budget fashion retailer, which has its international headquarters in Dublin, is a subsidiary of UK-based Associated British Foods. John Bason, finance director of the parent company, has called on property owners to “come to the table”.

Mr Bason said the decision to put rent payments on hold was made “to underline the urgency of this decision”.

The retailer closed its doors to shoppers in the Republic on March 18th, with the closure affecting about 5,000 workers. Since Sunday, all of its 376 stores across 12 countries have been shuttered until further notice in line with public health advice.

“We are looking for significant help,” he said. “These are extraordinary times and it is not as if this situation is pain-free for us.”

Associated British Foods is reviewing all expenditure in light of the crisis and has estimated it may be able to recover about 50 per cent of total operating costs. The retailer has “regrettably” stopped placing new orders with suppliers.

Before the epicentre of the virus outbreak moved to Europe, forcing store closures, Primark had in February signalled that it expected supply shortages from China. However, most Chinese factories supplying Primark have now reopened.

Separately, Penneys was one of the signatories to a letter from the Retailers Rates Action Group sent last week to Minister for Local Government Eoghan Murphy urging a 12-month rates freeze and a 50 per cent cut for six months to prevent retailers from collapsing. – Additional reporting: Bloomberg.