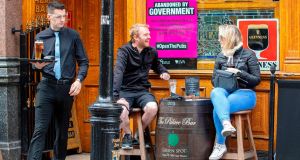 A worker serves a drink to customers sitting outside a pub in Dublin on Friday. Photograph: Paul Faith/AFP

It is the unknown nature of how coronavirus spreads rather than the known clusters of infection that matters when runaway community transmission requires tough new measures.

Last month, community transmission – the unknown spread of the virus in public – amounted to one in every five cases on average across the country. Now it is about two in every five of a much higher number of infections, particularly in Dublin.

That means a required change in how the public behaves. That means less mingling, less social contacts. That means removing opportunities for people to meet and mix. It follows then that banning indoor dining in restaurants and food-serving pubs should be added to the new Level 3 restrictions for Dublin to reduce person-to-person contact that the virus thrives on.

Restaurants, publicans and the hospitality industry reacted angrily that additional measures should be applied in a Level 3-plus alert to Dublin at short notice when they have spent vast amounts of time and money adapting their businesses to operate safely.

The trade has pointed to the fact there have been just five Covid-19 outbreaks in pubs, nine in restaurants and cafes (including just three in the past week) and two in hotels throughout the pandemic as evidence that they are safe places.

“The data is only as good as how you are able to interpret it,” said Patricia Kearney, professor of epidemiology of UCC.

“There is community transmission ongoing so it got into people’s households. If all that was happening was spread within households and no households were interacting, then there wouldn’t be any further transmission. It is out in the community and that is really concerning.”

Prof Philip Nolan, chair of the NPHET Irish Epidemiological Modelling Advisory Group, posted a series of tweets yesterday in response to “misreading and misinterpreting the data on outbreaks and clusters”. He noted that household outbreaks and community transmissions can arise from people catching the virus from meeting in restaurants but the source of the infection was not the focus of the public health investigation.

“We would like to go back and find out where people are getting the virus, but we don’t have the time or resources to pursue this academic exercise,” he said.

He pointed to international evidence “from better resourced systems on how the virus transmits” and that social settings, including bars and restaurants, drive community transmission.

“We know that in Dublin at least one in three cases are community transmission. Where is this happening? Wherever we mix socially: our houses, gyms, bars, restaurants,” he said.

“Sadly, unless we stop mixing in these settings, we know the disease will spiral out of control.”

A report published by the US Centres for Disease Control last week said that people who tested positive for the virus were about twice as likely to have reported eating recently at a restaurant. New York City is only set to loosen a six-month ban on indoor dining at the end of this month.

Kingston Mills, professor of experimental immunology at Trinity College Dublin, said that community spread was occurring because of a failure of “public buy-in” with people not turning up for tests and a contact tracing and testing system that was “still not optimal” with delays.

“There is a solution to it, of course, and that is to make it mandatory once you are called for a test to go to for a test,” he said.

Prof Patricia Kearney dismissed the “sledgehammer to kill flies” criticism appearing on social media in response to the restrictions on indoor dining.

“I certainly don’t think what we are facing is flies. We are at a critical point,” she said. “It is much more grave than that.”