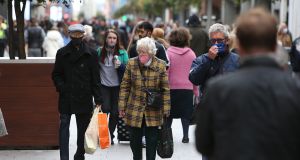 Henry Street: Nphet has recommended Level 5 for six weeks. But the Government is not going to go all the way nor for that long. Photograph: Stephen Collins/Collins

The Cabinet’s relationship to the National Public Health Emergency Team (Nphet) reminds you a little of Mark Twain’s reflection on his father.

“When I was a boy of 14, my father was so ignorant I could hardly stand to have the old man around. But when I got to be 21, I was astonished at how much the old man had learned in seven years.”

In the past few weeks Ministers have challenged and rejected Nphet’s advice – spectacularly in the case of Tánaiste Leo Varadkar – but have since come around to accept the validity of most of what it has to say.

The numbers don’t lie. The upward trajectory of the second wave of Covid-19 in Ireland has been dramatic. Since October 1st, the number of confirmed cases per 100,000 has risen from 96 to 232, an increase of 133 per cent.

Nphet’s advice to the Government at the weekend was stark – the trajectory of infections was rising alarmingly and the spread of the disease was getting increasingly difficult to control.

Two weeks after the Government rejected Nphet’s advice to elevate the alert plan to Level 5, it is now considering doing just that. However, to characterise it as the Cabinet finally succumbing to the view of the public health experts would be too simplistic.

Nphet has recommended going to Level 5 – almost a total lockdown – for a period of six weeks. But the Government is not going to go all the way to the highest level. Nor is it going to do it for six weeks.

The time when Nphet’s advice was accepted without question and without dilution is gone. Varadkar may have gone too far two weeks ago in his downplaying of that advice but the Government’s relationship with Nphet has changed.

It was noteworthy over the course of the weekend that senior Ministers looked beyond the Covid data to other social and economic indicators. In addition to the briefing from Nphet, Taoiseach Micheál Martin and his senior colleagues heard about some of the negative manifestations of the last lockdown.

They included a one-third increase in domestic violence, a precipitous fall in child welfare referrals, the impact on mental health and on social isolation, and the effect on non-Covid health services.

A point made by Simon Harris on The Week in Politics on Sunday was echoed by Ministers from all three coalition parties: the State cannot get into a lockdown without understanding what success looks like. Harris cited the Israeli measure which is a 0.8 reproduction, or R, rate – a marker which is well below where Ireland is now.

As to how far beyond Level 4 and how close to Level 5 the State should move, there were divided views among Ministers and advisers on Sunday and they don’t break down along party lines.

Within each of the three parties there are those who want to follow Nphet advice almost to the letter, and those who worry that the cure for one problem will create multiple problems elsewhere.

However, there seemed to be general agreement the escalation in restrictions would not last six weeks. “It’s much too long and will not give anybody hope,” said one Minister.

Even if the measures veer towards Level 5, there is certainty that schools will remain open, probably construction too, and that any restrictions on travel will deal with social isolation, taking on the idea floated by Labour’s Rebecca Moynihan and Brendan Howlin of making sure those who live alone are not left to fend for themselves but have a “social bubble”. There are divided views on sport, with one Minister saying the GAA championship would need to be called off.

This surge has been different. The majority of cases have been younger people and the deaths have remained relatively low compared to March. There have been lessons learned since then – in terms of the optimum treatment for patients, protecting nursing homes and vulnerable adults, and older people remaining vigilant in observing Covid-19 etiquette.

Also, this time around ICU admissions have been comparatively low. There is no capacity issue at present in hospitals. On the traffic-light alert system used for ICU capacity, it is still green – for now.

If the authorities can prevent the spread to older age groups, the measures now being introduced will be deemed a success.

As of Sunday night, it looks like “Level 4-plus” or “Level 5-minus” – which makes a bit of a mockery of the five-level plan. From the Government’s perspective, it puts out a message that the situation is serious but a bit different this time, that the restrictions won’t be open-ended, that they won’t be as severe, and that they will come to an end more quickly than the previous lockdown.