South and North have taken different paths during the outbreak on travel restrictions, testing, school closures and isolation periods 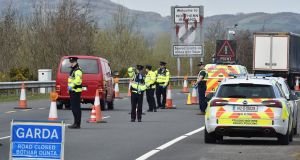 A pattern is developing in relation to the geographical spread of Covid-19 cases across the Republic, with incidence generally rising the closer one moves to the Border.

The exception is Dublin, which has had the most cases of the disease relative to population since the start of the pandemic until recent days when it was surpassed by Co Cavan.

The higher rates of infection in Dublin are no surprise for a virus that is spread through close contact, which is more likely to occur in big cities. Across the world, with some exceptions, Covid-19 is mainly an urban disease that prospers in overcrowded living and work settings.

The question for Irish public health officials is why rates are so high in Border counties and why they seem to growing faster than anywhere else in the country.

There is no breakdown of Covid-19 deaths by county and it might not tell us all that much anyway as many patients die in a hospital and these tend to be located in urban centres.

There is a general hospital in Cavan town but it has had just 20 confirmed cases of patients with Covid-19, and only one in the last 24 hours. Scores of staff have been infected over the past two months, however, so this would account for some of the case numbers in the county.

In common with other areas, the setting up of testing facilities was delayed by some weeks in Cavan. Now that these are operating at a higher throughput, more cases are being detected with a certain amount of “catch-up” involved.

Notwithstanding the contribution made by these factors to the case numbers in the Border area, it is hard not to think the differing approach to the crisis taken by the North and the rest of the UK, combined with the common travel area, has played a role in pushing up incidence in the nearest parts of the Republic.

From the start of the outbreak the North and the Republic have followed different paths on travel restrictions, on testing, on school closures and on isolation periods.

As Dr Gabriel Scally has written of the North’s decision to end mass testing, “since March 13th the two parts of the island have been headed in entirely different directions”.

The UK has since changed tack and re-embraced testing and contract tracing with a newfound enthusiasm, but the damage may have been done back then.

And while Taoiseach Leo Varadkar has asserted that the island of Ireland is “one epidemiological unit”, and a memorandum of understanding between the departments of health North and South was signed on April 7th, the differences in approach persist.

Citizens of the Republic have for weeks been required to restrict their movements to within 2km of home, yet it is not clear if this applies to anyone from the North who crosses the Border.

Gardaí in the Border area have been ordered not to arrest day-tripping Northerners because they do not have the powers to do so under emergency legislation.

While holiday homes across the State are likely to remain empty due to the ban on travel this coming weekend, this may not be the case in Co Donegal, where some people from the North have a second residence.

More importantly, as we contemplate easing restrictions, it is hard to see how further waves of infection can be properly controlled due to cross-Border movements unless the approaches taken on either side of that Border are fully harmonised.