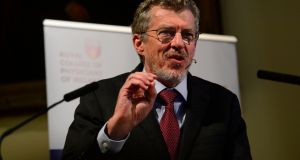 Prof Ian Frazer said cervical cancer can be eradicated by public health programmes similar to the one against polio. Photograph: Cyril Byrne / The Irish Times

The health programme against cervical cancer in Australia is so successful that it is expected that within 10 years, no women will be developing the condition there, the scientist whose work contributed to the development of the HPV vaccine has said.

Prof Ian Frazer was speaking to reporters at the Royal College of Physicians of Ireland, on Kildare Street, Dublin while protesters against the vaccine marched and chanted slogans outside.

The HPV virus causes cervical cancer as well as other cancers in men and women but Prof Frazer said it can be eradicated by public health programmes similar to the one against polio.

Approximately 250,000 women die every year from cervical cancer and the virus is believed to also cause other cancers in men and women.

A study conducted in Australia in 2007 found that no woman who had taken part in the country’s screening process over the period examined had died from cervical cancer.

The 80 women who died from the cancer during the period studied had come from outside the country or had not gone for screening as recommended.

People who are found to have the virus, are then screened for cells indicating the possible presence of cancer.

Since the discovery of the HPV vaccine, approximately 120 million people have received it.

In Australia there has been a 90 per cent drop in the number of women under 30 infected with the virus, as a result of the vaccination campaign.

So successful has the campaign against cervical cancer been in Australia, Prof Frazer said, that it has affected the ability to conduct quality assurance tests for the laboratories conducted smear screening.

This is because it is impossible to do such tests when there are so few smears from people with cancer.

The virus is spread by sexual activity. A body of people, many of them middle-class, are deciding not to take the vaccine, but the uptake is sufficient to undermine the ability of the virus to survive in Australia, the University of Queensland scientist said.

Prof Frazer was the keynote speaker at a day-long conference at the college that heard that anti-vaccine campaigners using emotive claims have caused massive falls in the number young women getting the vaccine in some countries.