Official advice says two but others say one, though the risk of spreading the virus rises 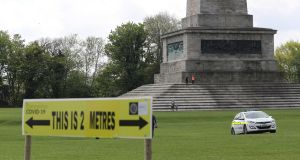 A debate has been happening in recent days on whether the recommended two metres of physical distancing with others to avoid the spread of the coronavirus can be reduced safely to one metre.

So what is the current guidance in Ireland?

The public health advice the State’s National Public Health Emergency Team (NPHET) is that people should maintain a distance of two metres to avoid the spread of Covid-19. Taoiseach Leo Varadkar said at the weekend “there is no change” to the two-metre rule.

HSE chief clinical officer Dr Colm Henry said on Sunday the two-metre distance was based on the projected distance that a droplet containing the virus can spread to another person through cough and sneezing. The decision to maintain a two-metre distance was the reason, he said, why the reproduction rate in the speed of the virus had fallen to the point where it is now suppressed.

So who wants it reduced to one metre?

Some Government ministers and other politicians. There was a debate at Cabinet last Friday evening about whether the recommended distance should be reduced to one metre as it would make it easier for people in education, healthcare and other areas of work and could help businesses such as restaurants reopen more quickly.

Would it help the health service?

Yes, HSE chief executive Paul Reid said that it would help the health service treat more patients and create “significantly extra capacity” across the HSE in emergency departments, waiting rooms and other areas if the recommended distance was one metre.

The World Health Organisation considers a one-metre distance between people to be safe.

So what level of protection does this provide?

WHO’s special envoy on Covid-19 David Nabarro, a professor of global health at Imperial College London, said that two metres “keeps you safe 99 per cent of the time but you can greatly reduce risk even at one metre because 70 per cent of the droplets will stick within one metre.”

What other international advice is there?

Has there been similar differing views among public health specialists in Ireland?

Yes, NPHET’s expert advisory group said in March that there was a “lack of evidence in distinguishing between one and two metres.” Dr Cillian de Gascun, chairman of the group and director of the UCD’s National Virus Reference Laboratory, said that in some circumstances such as in healthcare and domestic settings where it is not possible or practical to maintain two metres distance “the recommendation is that at least one metre but ideally two metres are maintained between people, especially in the context of keeping distance from symptomatic individuals.”

Are there other views out there in Ireland?

Yes, the State’s Health Protection Surveillance Centre advised healthcare workers in March to maintain a physical distance of at least one metre but ideally two from individuals with respiratory symptoms in suspected or confirmed Covid-19 cases. In another guidance note advising how to minimise the risk of transmission in pharmacies on March 16th, the HPSC said that “if a healthcare worker can maintain a distance of one metre from the patient’s mouth and nose, they are not within the likely range of droplet transmission. This helps protect both.”

Are there risks by moving back to one metre?

Yes. Infectious diseases expert Prof Sam McConkey said that moving closer to one another would “inevitably lead to more transmission of Covid-19” and that a one-metre limit could result in “up to four times more transmission.” He described the decision being a “political choice.”