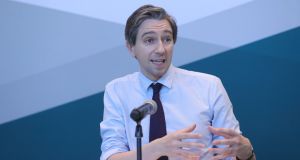 Simon Harris: the expert panel will report back to the Minister for Health by the end of June on how the Government responded to the pandemic in nursing homes. Photograph: Colin Keegan, Collins Dublin

More than 1,400 nursing home healthcare workers were infected with Covid-19 while working in facilities where clusters of the disease have been identified, new figures show.

This is more than double the number of healtcare workers who fell ill as a result of clusters in the State’s hospitals.

Data released by the HSE to The Irish Times show that there were 1,405 confirmed cases of the coronavirus disease among healthcare workers caught up in clusters of infection in nursing homes. This compares with 613 healthcare workers infected in hospital clusters, 251 in clusters at residential institutions and 182 in community hospital and long-stay units.

The Health Protection Surveillance Centre, which counts official numbers on coronavirus cases, only collects data on the work setting of a healthcare worker in cases linked to outbreaks.

The new figures from the HSE show the extent to which nursing homes lost staff to illness. They do not include healthcare workers and other nursing home staff who had to self-isolate and wait long periods for tests in March and early April to confirm whether they had the virus.

About 32 per cent of Ireland’s 24,000 known Covid-19 cases relate to healthcare workers.

“It is a serious statistic, one that causes concern with us,” Dr Colm Henry, the HSE chief clinical officer, said at a Covid-19 briefing on Sunday.

When asked whether he felt an expert panel on the Covid-19 response in nursing homes should have included a representative of private nursing homes, HSE chief executive Paul Reid said the make-up of the group, announced on Saturday, was a matter for Minister for Health Simon Harris. He expected the panel would have “deep engagement” with the sector.

The panel will report back to Mr Harris by the end of June on how the Government responded to the pandemic in nursing homes, which account for more than half the deaths from Covid-19.

Nursing Homes Ireland, which represents private operators – about 75 per cent of the sector – has said it was “critical” that the panel takes on board the experiences of the facilities.

The panel will be chaired by UCD professor Cecily Kelleher, who will be joined by retired geriatrician Prof Cillian Twomey, RCSI director of nursing Petrina Donnelly and Bridget Doherty, who will represent the public interest.

Siptu, the State’s largest trade union, which represents thousands of staff working in nursing homes, called for healthcare workers to have a voice on the panel and asked Mr Harris to appoint a trade union representative.

“Many of our members working in these settings contracted Covid-19 and the staffing models in many private nursing home facilities exposed workers to long hours and fatigue,” said Siptu organiser Paul Bell. “These are two burning issues in this sector and workers want to see them addressed.”

Anne O’Connor, HSE chief operations officer, said the number of residential care facilities deemed at high risk from the disease had fallen to just seven from 75 a month ago. A further 72 care homes are receiving significant support from the HSE, she said. There are clusters of the disease in more than 250 nursing homes out of a total of 571 in the State.

The HSE was supporting 804 long-term residential care facilities, but the majority of these, 448, are “on our radar for regular, normal PPE delivery,” she said.

Ms O’Connor said a “key concern” for the HSE was the delay in elderly patients being discharged back to nursing homes from hospitals because of outbreaks. There are 409 people in hospitals whose discharge has been delayed, up from 211 in early April.

Dr Henry said there was “no blanket diktat” that every nursing home resident should be tested on discharge from hospital but there was a “very low threshold” for ordering a test for older people given asymptomatic spread and how only a third of older people have typical symptoms.