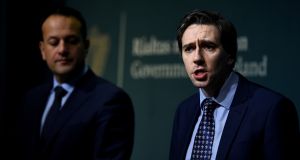 Members of the public should continue following Covid-19 restrictions as complacency could lead to disastrous and “potentially fatal” outcomes, Minister for Health Simon Harris has said.

In a video posted on Twitter, Mr Harris called on people to continue staying at home and underlined that any progress made so far was “fragile”.

“There’s an air of complacency creeping in in relation to Ireland’s battle against Covid-19 and we have to push back against it,” he said.

“We’re at a very delicate moment and it would not take much for that to be reversed. I’m hearing stories of people beginning to somewhat relax their interpretation of the phrase ‘stay at home’ or the 2km rule and I really need to appeal to you not to do that.

“Do not allow complacency set in. Do not allow us to say ‘ah sure we’re going well in Ireland and I can let the foot off the pedal’. That would be disastrous. It could potentially be fatal.”

Mr Harris acknowledged that being separated from loved ones was difficult, adding that he had not seen his own mother for weeks.

The Minister said being separated from family and friends at this time is much better that the alternative of overwhelmed intensive care units (ICUs), packed hospitals and significantly higher rates of coronavirus related deaths.

“We can’t let that happen so let’s keep at it and let’s make these two weeks count.”

The president of the intensive care society of Ireland Dr Catherine Motherway has warned that until a vaccine is found people are going to have to be “very careful how we live.”

Dr Motherway told RTÉ radio’s Today with Séan O’Rourke show that it was unlikely that the virus can be suppressed which reinforced the need for a vaccine and “some form of treatment.”

Prof Paddy Mallon, an expert in infectious diseases, also warned against complacency about Covid-19 as “huge strides” had been made to get Ireland to the “ideal position” to fight the pandemic.

However, he said what happens in the next two weeks would be key to navigating a way out of the restrictions.

“Any slippage would mean we lose ground. We need to hold position,” he told Newstalk Breakfast. “If we lose any ground in the next two weeks it will set us back and this situation will last even longer.”

He said that in the next two weeks getting a handle on the situation in nursing homes and delivering more testing faster were “really vital”.

Prof Mallon said taking tests and providing results within 24 hours would help to provide real time data “to tell us where we are”.

He said there was enough capacity and trained staff to carry out large scale testing but that the processes needed to be put in place to do this.

“It is eminently doable. We have the machinery in place to test ourselves out of this,” he said.

Mr Harris warned that the battle against Covid-19 would go on “for a long time” and that he did not expect a “light switch moment” on May 5th when restrictions could suddenly be reversed.

While he would like to see schools reopen, he underlined that this would only happen when public health experts confirm it is safe to do so.

“I know that it’s hard for kids being off school, it’s hard for parents too. I know it’s hard from a mental health point of view or wellbeing point of view. But let me be really clear, we won’t be relaxing any rules until public health doctors think it’s a good idea.”

Mr Harris said he would speak with his European counterparts by teleconference on Monday to share updates on how efforts to tackle the virus are going across the European Union. A Cabinet meeting will also be held by the Taoiseach to discuss ongoing efforts to curb the spread of the virus in Ireland, he said.

He said the testing of residents and staff in care insitutions would be the priority for this week.

Prof Jack Lambert, a consultant on infectious disease, said widespread testing for Covid-19 in nursing homes and residential facilities would be “a good start” but that it needs to be linked to rapid treatment and contact tracing.

He said there was a need for an action plan to provide additional care and treatment for residents and staff in these facilities and that staff from acute hospitals ought to be be re-deployed quickly to these facilities to boost treatment plans.

Prof Lambert said “boots on the ground” were needed in the sector as many nursing homes were under-resourced in terms of staff and expertise and clusters of the virus were continuing to emerge in them.

It was possible to limit spread in a facility between patients and staff, he said, but this requires more staff to be brought into homes to support them “in any way we can”. He said he had heard of some nursing homes with no GP support and a lack of nurses.