Patience can wear thin with all this family time

We’re past pretending we have it under control. It’s a jungle out there – and the kids are feral 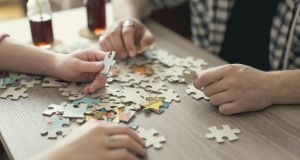 “Jigsaws! Let’s do jigsaws,” I suggested enthusiastically one afternoon, trying to ease my guilt about my homeschool failings

“Patience is a virtue,” it’s said, and one that seems to be in increasing short supply across the board here as the restrictions continue. The teens watched the government update with me last week, hoping beyond hope that there would be some good news. The Junior Cert student was the only one who felt any semblance of relief after it.

“Three more weeks,” one said crestfallen at the news.

“Well, aren’t we lucky there’s so many of us to keep each other company so,” I offered as an attempt at reassurance.

For this particular teen it worked. It helps when, like him, you are the sort of person who will take whatever little bits of consolation are on offer. It hasn’t stopped him waking up and pacing the floors during the night, however – the worry of it all weighing heavily on his young shoulders.

The others looked at me like I had temporarily lost my mind. Weeks more of lockdown with only their siblings and parents for company. All this time together. So much time together.

With few other outlets and little chance of alone time in a house where younger siblings believe personal space is a concept that’s overrated, the prospect didn’t hold quite so much appeal.

Emotions have gone into overdrive here – including mine. It almost feels like I’m pregnant again or in that early postpartum period when poignant advertisements or scenes on the television, a kind comment or gesture, or indeed discovering we’ve run out of digestive biscuits can be enough to reduce me to tears.

“Sweet Jesus, they don’t ever seem to stop fighting these days,” I declared by way of greeting to the poor unfortunate who timed their phone call just as the sixth row of the day had broken out. It wasn’t yet 11am.

The laughter on the other end of the line was comforting. I wasn’t alone in my sentiments or my battles. We’ve all gone past the stage of pretending we’ve got it under control. It’s a jungle out there (or in here to be more Covid-19 restriction-compliant) – and the kids are feral!

My popularity is fading fast with my alter ego, Muinteoir Mamai, having completely lost her appeal. It recovers slightly only on those days I make pancakes for lunch.

Himself, of course, manages to remain Mr Popular. As he arrives home from work each day the kids squeal with delight and excitement, and launch themselves at their father when he walks in the door. Fun Daddy is home with his patience firmly in tact – helped by the fact he hasn’t spent the day refereeing impromptu wars that have erupted because one child breathed or looked at another.

“Jigsaws! Let’s do jigsaws,” I suggested enthusiastically one afternoon, trying to ease my guilt about my homeschool failings.

The Hulk, surprisingly, was intrigued enough to abandon the wrestling ring or what we commonly refer to as the trampoline.

Iron Man, temporarily without an opponent and never one to be left behind, followed suit. It wasn’t long before several more children joined them at the table.

Naively believing I had found an educational and cognitive beneficial activity that they could all partake in, I sat down alongside them and opened the laptop to work.

“Don’t help me!” the Hulk roared as an older sibling tried to point out where a piece of his jigsaw might go. “I can do it by myself.”

Iron Man, meanwhile, appreciating that he might not finish first otherwise, was keen to enlist the assistance of any willing helpers. It wasn’t long before another irritated child felt the need to point out that everyone’s jigsaws actually had a different number of pieces which meant that some people were doing “super easy” ones. The relative calm was broken.

I tried to block out the din, mentally questioning once again a recent study carried out by seismologists which had revealed a dramatic decrease in noise levels in Ireland since the pandemic began. It is obvious they had no’t been in the vicinity of chez Hogan.

Evenings are for family movies – a chance to block out Covid-19 temporarily from our minds. A time for escapism before bed and for cuddles on the couch.

After a long day’s squabbling the troops gathered to pick a movie on Disney Plus. The Hulk, having discovered he quite likes jigsaws, left his completed puzzle on the dining room table to join his siblings. “I love you,” a little brother says unexpectedly to his sister. “I love you too, honey” she replies.

And I’m reminded once again that we’re lucky there’s so many of us to keep each other company throughout this.