Large groups of people gathering in Blackrock village can be see on the weekend, getting takeaway pints and drinking them in groups on the street, highlighting the trouble of maintaining social distancing rules. 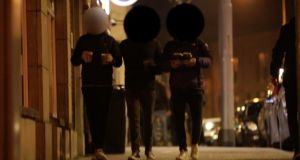 Signs forbidding outdoor drinking are to be erected around Blackrock in south Dublin following large gatherings in the village centre last weekend with little sign of social distancing.

The popularity of on-street furniture, placed by Dún Laoghaire-Rathdown County Council as part of its response to Covid-19, has been blamed for people congregating to purchase takeaway drinks from local pubs.

The activity seen last Friday and Saturday night in the village prompted some local irritation at an apparent disregard for public health measures and gardaí intervened. They are also understood to have raised their concerns with members of the local business community.

Ahead of this weekend, the local authority said it “is working with the gardaí to tackle these matters and will be providing signs to remind the public that it is against bylaws to drink in public spaces/streets”.

It said enforcement of any alleged breaches of licensing laws, anti-social behaviour or public health measures is a matter for gardaí.

“The public seating provided during the pandemic has brought many positive benefits and is extensively used by young and old,” it said. “We would hope that this infrastructure would be respected by all citizens and will be a valuable addition to town and village centres for years to come.”

One well-placed source claimed gardaí had suggested the furniture be temporarily removed but said this would not sit well with the community.

Gardaí did not respond to that claim but said they were aware of reports of a number of people drinking in public and are liaising closely with the local council, agencies and businesses.

“An Garda Síochána has and will use appropriate legislation where necessary,” a spokesman said.

At one point in mid-September, with 35 cases per 100,000 people over a 14 day period, Blackrock recorded the lowest incidence rate of Covid-19 in Dublin. Data earlier this month indiciated Blackrock’s rate was the seventh lowest out of 31 areas in the capital.

However, footage of people gathering to drink outdoors has caused tensions amid ongoing lockdown measures, with some wishing to socialise and others put out by what they consider irresponsible behaviour.

Under Level 5 Covid restrictions pubs are permitted to sell takeaway drinks. No organised outdoor gatherings are permitted and there is no indication last weekend’s activity was planned.

“Young people who really have nowhere to go; in fairness to them, from what I can gather from talking to people they [were] all either in couples or in small groups,” said local councillor and former government minister Mary Hanafin, stressing there were no large individual groups.

“But there are so many of them there that it’s not possible for them to socially distance.”

Fianna Fáil TD for Dún Laoghaire Cormac Devlin said the street furniture had become a de facto lounge for some of the local establishments.

“I do have great sympathy for them because many of them have closed,” he said, echoing widely held concerns for the town’s business community.

Mr Devlin said such gatherings were also apparent in other parts of south Dublin.

On social media, the village was dubbed by one person as “the new Temple Bar” . Many praised the recently installed furniture and other measures in the area enjoyed by families and the wider community.

“I think Blackrock is doing a lot better than other villages just because of the public realm changes that have been made,” said Green councillor Séafra Ó Faoláin.