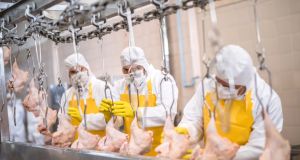 The Migrant Rights Centre claims there are more than 15, 300 workers in the meat sector, of which 58% are migrant workers. File photograph: Getty

Why are meat plants so problematic when it comes to Covid-19 spread?

Hard lessons of the coronavirus pandemic strongly indicate spread of the virus has been most pronounced within care homes, meat-processing plants and anywhere people gather in close proximity indoors. This is especially so where alcohol is consumed – hence concerns about pubs and nightclubs.

There is a particular set of circumstances giving rise to risk in relation to meat plants and many food-production companies. The combination of high moisture, cold temperature, inevitable close proximity of workers, physical exertion and noisy workplaces which force people to shout at each other are frequently in the mix.

Rigid production lines often involving, for example, working alongside a conveyor belt of animal carcasses on hooks passing along a factory’s kill line, means work is at close quarters involving repeated activity by staff standing shoulder to shoulder. As an essential industry producing food, meat plants were not closed during the pandemic lockdown.

The work is physically demanding but low paid. This means positions are often filled by migrant workers, many of whom live in close proximity to one another in basic facilities close to plants – posing additional risk of transmission.

What is the latest incidence of outbreaks in meat plants?

At the height of the pandemic, it became clear meat-plant case clusters were a big problem. It prompted an investigation of working practices, scale-up of monitoring processing units and tightening up protocols by health authorities and the Department of Agriculture and Food.

Up to the beginning of July, there were 1,115 cases at meat and poultry plants with the first case recorded on St Patrick’s Day. Cases peaked in May and have fallen dramatically since. The problem, however, is meat plants are mirroring a resurgence of Covid-19 in many countries including Ireland.

Earlier this week, the National Public Health Emergency Team said there were four outbreaks ongoing in meat plants, associated with 94 cases. This was before the discovery of a further 80 cases at Brady’s Ham plant in Co Kildare.

What new controls were introduced?

The Health Protection Surveillance Centre produced detailed advice in response to outbreaks, with measures which are almost as rigorous as those in a hospital setting. The advice sets out requirements for frequent deep cleaning of equipment, sanitising of workers, wearing of personal protection equipment and allowing for physical distancing to be put in place. If 2m of space between work stations cannot be attained, Perspex screens should be installed between each person.

Workers should be organised into pods or groups, where possible. Pod members work together, take their breaks together, change together and as far as possible even travel to work together.

If one person then becomes a suspected or confirmed case only members of their pod are “contacts”, and the pod can be excluded together. This is to allow the appropriate skill mix to always be available and facilitate the smoother running of the facility preventing key workers being excluded together.

Self-isolation at home is not recommended if vulnerable people such as those with chronic medical conditions live in the same property. In such instances, people who are able to self-care are offered a place in the State’s isolation facilities, such as the Citywest Hotel in Dublin, so they can self-isolate away from family and unaffected house-mates.

What have investigation of meat plants uncovered?

An estimated half of Covid-positive workers in a single large Irish meat plant were found to be asymptomatic following mass testing, according to briefing documents given to the public health emergency team in early June.

It suggested asymptomatic workers could have been a significant driver of infection in meat plants.

“Where mass testing has been undertaken, it is noted that there are high numbers of asymptomatic cases,” one report noted.

“Following mass testing in one large facility, it is estimated that 50 per cent of positive workers were asymptomatic. [This] could be an important factor in meat processing plants.”

The briefing documents show there were almost 300 cases of Covid-19 associated with an outbreak in a single meat processing plant in the State, more than twice the figure associated with the next largest outbreak.

Risk factors in plants were found to include poor language skills, crowded accommodation, and the potential for spread to spouses or house-mates who “are often similarly vulnerable workers in nursing homes, supermarkets, etc”.

The vulnerability of foreign workers in such circumstances has been highlighted by the Migrant Rights Centre, which has claimed there are 15, 338 workers in the meat sector of which 58 per cent are migrant workers.

What has been the response of the meat sector?

At that committee hearing in mid-July, Meat Industry Ireland said the situation with regard to Covid-19 in the sector had improved significantly. There were no active cases of the virus and 97 per cent of people who had Covid-19 had recovered and were back at work.

It confirmed 30 per cent of workers in the sector were Irish, with the remainder being either non-European Union or EU citizens. With near full employment, finding labour was often difficult, it added.

The industry group said it had no issue with unannounced inspections from the HSA.

From a situation, where Covid-19 was virtually eliminated in Irish meat plants just a few weeks, the curve is rising again – albeit from a low base. But it serves to underline the threat from an insidious virus capable of resurging when given the opportunity. Great vigilance is still needed, just as it was when cases were steeply rising in April-May.