Coronavirus: No deaths reported in Northern Ireland for past two weeks 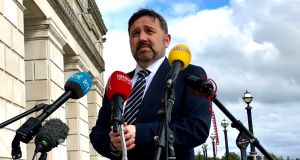 For the fourteenth consecutive day the North’s Department of Health has reported no coronavirus deaths in Northern Ireland, leaving the total number of confirmed pandemic fatalities there at 556.

The last Covid-19-related death recorded by the department was on July 13th.

Also on Monday, the department reported 21 new cases of Covid-19, bringing the total number of confirmed cases of the disease in Northern Ireland to 5,912. So far 137,541 people have been tested for Covid-19 in the North.

Meanwhile, the Northern Ireland Executive held a special meeting on Monday to discuss the decision over the weekend to introduce a 14-day quarantine for people returning to Northern Ireland from Spain.

Some holidaymakers who flew back to the North over Monday and Sunday complained that while they understood the need for self-isolation on arriving home – due to a spike in Covid-19 cases in Spain – they felt they should have been given more notice about the quarantine decision.

The North’s Minister for Health Robin Swann said on Monday there was no ideal time to take such a decision.

“A phased introduction would not have made sense. Public health considerations must take priority,” said Mr Swann.

“The decision was taken after consideration of the latest data. Covid-19 prevalence in Spain has increased in recent weeks – a trend which accelerated rapidly in the latter half of the past week.

“I appreciate that people returning from Spain and its islands will now be faced with an unexpected period of quarantining,” he added.

Mr Swann said the advice from the North’s chief medical officer Dr Michael McBride and chief scientific adviser Prof Ian Young was “that a negative Covid-19 test immediately on return from Spain would not exclude infection – so a period of self-isolation would still be required”.

The Minister added: “It has to be reiterated that Saturday night’s decision [to introduce the quarantine] was not taken lightly. Experience has shown how Covid-19 can be spread by international travel. The quarantining arrangements have been introduced to help keep people safe.”

On Monday the North’s Minister for Communities Carál Ní Chuilín and Minister for Rural Affairs Edwin Poots announced that £11 million (about €12 million) is to be provided to support town and city centres in their economic recovery from the impacts of coronavirus.

The Ministers said the funding will be allocated to councils in two tranches to deliver measures that will help “provide a safe environment for visitors, shoppers and workers within town and city centres”.

This may include measures such as the use of awnings/canopies; outdoor furniture; heaters; queueing systems, and digital screens and other signage.

It was also announced on Monday that the Covid-19 infection survey is being extended to Northern Ireland. The survey has been running in England and Wales, where 195,000 swab tests have been carried out with the aim of building up a detailed picture of coronavirus infection rates.

Participants will be asked to take further tests every week for the first five weeks, then every month for 12 months.

Welcoming the move, Mr Swann said: “The more we know and understand about Covid-19, the better equipped we will be to deal with it.”