Truth as commodity: History warns us to watch out in wake of Covid-19 vaccine 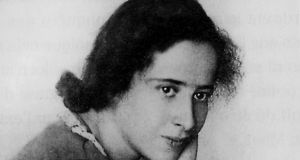 Hannah Arendt: The political philosopher reminded us that “the sense by which we take our bearings in the real world – the category of truth versus falsehood – is being destroyed”. Photograph: Apic/Getty Images

There was nothing conspicuously apocalyptic about the culture of the Weimar Republic that was the German state for almost 15 years after the conclusion of the first World War. If there was any predominant public mood in Weimar, it would more likely have been relief, the elation of liberation from a terrible war that had ground to an uneasy halt in November 1918.

It was a giddy sense of emancipation that submerged itself in a new and uninhibited pursuit of happiness, at all costs and at any cost. This was freedom untrammelled. The pleasures of life were to be seized in whatever shape they might proffer themselves.

In Weimar Germany, however, there was more to be discerned, a little deeper beneath the surface and a far darker reality. Above all, there was a collective feeling of resentment following a demeaning armistice and a vengeful Treaty of Versailles.

The myth that Germany had lost the war, not in a fair fight but because it had been stabbed in the back by sinister forces within the state – the Dolchstosslegende – was propagated, not by Hitler, but immediately after the Great War by democratic politicians.

And throughout the 1920s there was not only severe economic insecurity throughout Germany, but also a continuing political clash between an idealistic but temperate and democratic centre ground on the one side and, on the other, a far from temperate old guard of the social and military elite which was later to entwine itself with the new extreme right of ruthless totalitarianism.

But Weimar democracy, while it lasted, did seek a greater social equality and inclusiveness throughout society. Nor should we ever overlook the brilliance of Weimar either – the music of Kurt Weill, the architecture of Walter Gropius, the science of Albert Einstein, the paintings of Otto Dix, the philosophy of Martin Heidegger, and so much else that might in retrospect have made Weimar appear almost as a golden age had it all ended less calamitously.

There will additionally be the continuing ache of bereavement for some, just as there was for many millions following both world wars

Is the western world now facing – when Covid-19 becomes a harrowing memory – a new metaphorical Weimar? “Are we nearly there yet?”

When finally there is an effective therapy for Covid-19 and a widely available vaccine, which there will be some day – albeit, probably later than sooner, alas – there will also, equally certainly, be a response of light-heartedness and exhilaration throughout society.

Exuberance will inevitably accompany the longed-for freedom, no matter how dreadful may have been the crushing pain that preceded it. And this is something that we should be prepared to welcome.

There will additionally be the continuing ache of bereavement for some, just as there was for many millions following both world wars. But we can be equally certain that there will also be the search for scapegoats – inevitable questioning regarding the handling of the pandemic, and whether things “might have been done better”.

We know already that the economic consequences of Covid-19 will be globally devastating, in terms of public finances, business failures, unemployment and personal insolvency. All of these too were features of Weimar in the wake of the punishing financial retribution inflicted on Germany by the Treaty of Versailles, and by further economic disasters in the late 1920s.

And we know where all of this was to lead to. There is a warning from history.

Rather than be seduced by any siren call of easy answers to massive challenges, we will have to live with complexity, sacrifice and exertion in the post-Covid-19 world. It was Einstein, already referenced above, who suggested that “things should be made as simple as possible, but not simpler . . .”

When we emerge into what is already being heralded as a future of sunshine, we may perhaps hope to savour some of the accomplishments of Weimar

Likewise we must protect – not by refusing to ask valid questions but in a spirit of honesty, courage and fairness – the scapegoats who will be hunted. Above all else, we must grasp the need to pursue raw truth before all else, regardless of the integrity and unpopularity that this will demand of us.

Another offspring of Weimar, the political philosopher Hannah Arendt, reminded us that “the result of a consistent and total substitution of lies for factual truth is not that the lie will now be accepted as truth and truth be defamed as a lie, but that the sense by which we take our bearings in the real world – the category of truth versus falsehood – is being destroyed”.

Arendt was not a cynic by nature, but she understood – more than most – the insidious power of the consistent lie.

And so, when we emerge into what is already being heralded as a future of sunshine, we may perhaps hope to savour some of the accomplishments of Weimar – finding a new dimension in art and culture, and seeking a new emphasis on social justice and gender inclusion.

But there will also be the clouds that were visible in Weimar too – the certainty that if independence of thought is ever jettisoned and public truth ever seen as a disposable commodity, the road ahead is overshadowed by a greater terror than Covid-19.