HSE is asking up to 2,500 people to follow up with their own close contacts to clear backlog 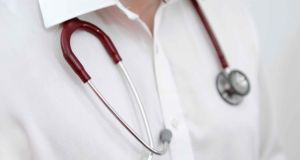 GPs have complained that the contact tracing problem was being ‘foisted’ on already overloaded doctors. File image: PA

Asking GPs to help deal with a backlog of close contacts of Covid-19 cases will cause “more confusion” and add to an already “overloaded” primary care sector, doctors said on Wednesday.

The Irish Times disclosed on Tuesday night that thousands of close contacts of positive Covid-19 cases from over a three day period will not be contacted by the HSE because the contact tracing system was overwhelmed by cases last weekend.

The HSE has said that it will send a text message today to between 2,000 and 2,500 people, who have already been informed by text of their infection, asking them to tell their own close contacts to contact their GPs immediately to seek a Covid-19 test.

Normally contact tracers call newly-infected people to ask for their close contacts and then call those close contacts to arrange for them to be tested to stem transmission of the disease.

However, the HSE’s contact tracers faced an unprecedented number of confirmed cases last weekend, resulting in a backlog of cases over three days, from Friday to Sunday.

The issue was raised in the Dáil on Wednesday morning as the Oireachtas health committee said it would hold a special meeting next week on problems affecting the Covid-19 contact tracing system.

Monaghan GP Dr Illona Duffy said doctors had been predicting for some time that the contact tracing system was being overwhelmed. It was disappointing to learn the issue was now being “foisted” on already “overloaded” GPs.

Arranging tests for close contacts would add further to their workload, while also meaning delays for other patients attempting to contact their GP, she told RTÉ Radio’s Today with Claire Byrne.

She also questioned how effective the move would be. Patients would feel unnecessary guilt that they had contracted the virus, and would be reluctant to report this to their contacts or unable to do so if they did not have details for everyone with whom they had been in contact, she said.

Dublin GP Maitiu O Tuathail pointed out that contact tracers were professionally trained and to expect patients to alert their contacts themselves undermined the system.

“GPs have been saying for days that the contact tracing system had collapsed.”

There was a huge risk, he said, that large numbers of close contacts will not be informed. “If we didn’t have a reason to lockdown two days ago, we do now.”

If someone was ill with Covid, the last thing they wanted to do was to start contacting people, he added.

“This is going to lead to more confusion and more problems.”

“There are so many nuances.”

Defending the HSE’s decision, its national lead for contact tracing Niamh O’Beirne said it would allow the system to “hit a reset button” to get ahead of the disease again.

“Over the week we simply couldn’t get to everyone. Whilst not ideal, we are sending a text today to everyone that we didn’t manage to get to. We’re asking them to forward that text to their close contacts.”

Ms O’Beirne confirmed on RTÉ Radio’s Morning Ireland that not everybody tested on Friday, Saturday and Sunday would receive the text. Certain groups have been “pulled out”, she said. These include children aged 4-19 and older people who may need further support.

“It’s not ideal, but it’s really important with the speed of the disease at the moment that we deal with the most recent cases, that we try to get ahead.”

She said 70 additional staff were being employed each week to build the State’s contact tracing capacity. Interviews were continuing to fill posts and the aim was to try to get ahead of demand and to have the capacity to deal with 1,500 cases per day if needed.

Highlighting what she saw as an anomaly, however, Dr Duffy cited the case of a GP who had volunteered to work at contact tracing centre but they had to fill out a lot of paperwork and had been asked for details of their Leaving Cert. This person would have been ideal for the work of contact tracing, she said.

“Why did they not prepare in advance?... This shouldn’t be a surprise, we knew it was coming.”

The HSE was in competition with the NHS for personnel to work on the Covid-19 pandemic, the Oireachtas health committee head on Wednesday.

Irish Medical Organisation (IMO) chief executive Susan Clyne said public health specialists who played key roles in contact tracing were now “like gold dust” and were being recruited by authorities, particularly in Wales and Scotland. She added they were being told they could work for the NHS while still living in Ireland.

Professor Philip Nolan, chair of the National Public Health Emergency Team (Nphet) Irish Epidemiological Modelling Advisory Group, said the move was disappointing but it was the right thing to do.

The HSE had tried to enhance the contact tracing system and it needed to continue to do that so the system would be better prepared, he told Newstalk Breakfast.

“A huge amount of this was done during the summer,” he said.

A professional body representing GPs asked members to cooperate with the HSE’s move, while acknowledging the additional workload.

In a letter to GP members of the IMO on Tuesday evening, Dr Denis McCauley, IMO GP chairman, told colleagues that GPs had so far only referred patients with symptoms for tests.

“However, given the very significant and rapid increase in numbers there is extreme pressure on our public health medical colleagues and on the contact tracing systems.

“This has impacted on their ability to respond quickly to close contacts and our public health specialists are prioritising workplace, educational and residential facilities outbreaks,” said Dr McCauley.

Whether patients were symptomatic or not, they would be referred for a test and advised to self-isolate for 14 days.

If a patient’s test was negative they would be advised to continue restricting their movement for 14 days.

If positive a patient would be advised to continue self-isolation for 10 days or five days following “clearing up of any fever, whichever is the later”, Dr McCauley said.

“This is a short term issue that will be resolved within the next week to 10 days. For this short time period GPs are being asked to assist in the testing referral process for a particular category of patients who are self-identifying as close contacts and who present to your practice.

“This is a significant ask of GPs who are already under pressure however we believe it is necessary at this time given the surges across all communities and in support of our public health colleagues for a defined period of time while additional staff are being recruited/trained and IT enhancements are put in place.

“Under no circumstances are GPs being asked to undertake any contact tracing or to identify patients who fall into this category. It is absolutely recognised that public health are experts in contact tracing and there is no role for GPs in that process.”