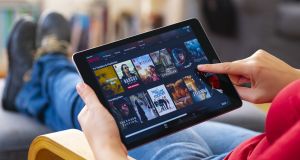 Netflix is facing increasing competition from Disney, Warner Media and others. Photograph: iStock

The company added 2.2 million paid subscribers globally during the quarter that ended September 30th, missing Wall Street’s target of 3.4 million and its own forecast.

Earnings per share also landed below analyst expectations at $1.74. The consensus forecast was $2.14, according to IBES data from Refinitiv.

Shares of Netflix, one of the biggest gainers this year as people stayed home amid the pandemic, dropped nearly 6 per cent to $494 in after-hours trading on Tuesday.

“Domestic subscribers were nearly flat, which highlights Netflix’s saturation in the US,” said Ross Benes, analyst with eMarketer. With domestic additions slowing, revenue growth will likely come from price increases, he said.

The company reported a blockbuster quarter at the start of the worldwide coronavirus pandemic, adding 15.8 million paying customers from January through March.

Netflix had warned investors that a sudden surge in new sign-ups would fade in the latter half of the year as Covid-19 restrictions eased. Netflix forecast in the fourth quarter it would bring in 6 million new subscribers around the globe, short of the 6.51 million that analysts expected.

The streaming video pioneer is trying to win new customers and fend off competition as viewers embrace online entertainment. During the third quarter, Netflix released Emily in Paris, Enola Holmes and The Devil All the Time.

Netflix acknowledged that competition was increasing as studios across Hollywood from Walt Disney to AT&T’s WarnerMedia have restructured to compete more directly for video subscribers.

“Competition for consumers’ time and engagement remains vibrant,” Netflix said in a letter to shareholders.

Netflix said its results reflected the fact that it saw such a big surge in customers early in the year.

“We continue to view quarter-to-quarter fluctuations in paid net adds as not that meaningful in the context of the long run adoption of internet entertainment, which we believe is still early and should provide us with many years of strong future growth as we continue to improve our service,” the company said.

Netflix officials noted the company had pulled in more subscribers in the first nine months of 2020 than in all of 2019. It ended the third quarter with 195.2 million global streaming customers.

“Next time we get together, we should be over 200 million members, completing a year of 34 million (additions),” an annual record, Co-Chief Executive Reed Hastings said in an analyst interview.

The company also said it expected to complete shooting over 150 productions by the end of the year and that it would release more original programming in each quarter of 2021 compared with 2020.