104 cases reported in Dublin, 37 in Donegal as public told to hold firm through winter 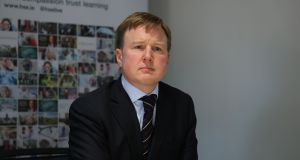 Five people have died from Covid-19 and 248 more cases have been confirmed in the State by the National Public Health Emergency Team (NPHET) on Saturday.

Dublin has the highest number of cases at 104. Donegal has 37, Cork has 36, Kildare and Westmeath have eight cases. There were six cases in Kilkenny, Laois and Offaly, five in Longford, Monaghan and Wexford, and the remaining 22 cases are in 11 other counties.

A total of 34,560 cases of the virus have been confirmed in Ireland since late February and the total number of deaths now stands at 1,802.

Of the cases notified today 132 are men and 115 are women. 67 per cent are under 45 years of age. 36 per cent are confirmed to be associated with outbreaks or are close contacts with a confirmed case. Thirty-six cases have been identified as community transmission.

Earlier on Saturday, the chairman of the National Public Health Emergency Team’s Covid-19 expert advisory group  warned there is “no magic bullet” coming in the next six months in relation to the coronavirus.

Dr Cillian de Gascun, also the director of the National Virus Reference Laboratory, said it is hard to predict when there will be a vaccine available adding “no one can really have certainty”.

“If we have a vaccine that’s in place and that we can roll out say in the middle of 2021, and have it in place for the following winter [2021], I think that would really be a positive step,” he told RTÉ’s Saturday with Katie Hannon.

“Realistically we are going through this winter with our current non pharmaceutical interventions and our current public health messages and that’s why it’s so important that people continue to bear with us and hold firm on this because there’s no magic bullet coming in the next six months.”

Dr de Gascun said there is work ongoing to increase the country’s testing capacity for the virus. A demand for testing had significantly increased when schools returned in September, he said, with more than 15,000 referrals per day coming through.

He said the demand from schools had “plateaued and stabilised” but that this data [of 15,000 daily referrals] “feeds into the system and makes you realise that the capacity is not sufficient so there is work ongoing to develop, to bring that capacity where it needs to be”.

“What we want to do from a testing perspective is that we want to be able to meet the demand that is there. There’s been a huge fixation on numbers, which I can understand but probably isn’t helpful,” he added. “Ultimately we want to have capacity to test everyone who needs to be tested.”

Dr de Gascun said “nothing is inevitable” in relation to further restrictions for other parts of the country but acknowledged there are “worrying trends”, including an increase in cases, a rise in the 7-day and 14-day incidence rate as well as the number of people in hospital and intensive care with the virus.

“All of these are concerning signs and we are obviously not yet in the depths of winter so we’re concerned that if we get into a bad place now, it’s going to be very difficult to get out of it in winter.”

He said it was important “from a NPHET perspective that we act early, that we act in a proportionate manner”.

But it’s really important that the other counties don’t look at Donegal and Dublin and think ‘oh well, we’re fine so, we don’t have any concerns’,” he said. Dr de Gascun said he didn’t want to predict whether the Level 3 restrictions would be extended in Dublin in two weeks’ time but that the message to the public would not change.

He stressed that people can transmit the virus either before they begin showing symptoms or even if they have no symptoms at all.