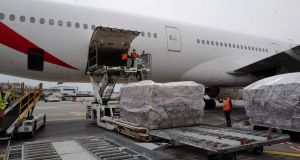 France has expressed its “disapproval” over disinformation published by Lu Shaye, the Chinese ambassador to Paris, on his embassy’s website by summoning the ambassador to the foreign ministry.

“Certain public positions taken recently by Chinese representatives in France are not consistent with the quality of bilateral relations between our two countries,” foreign minister Jean-Yves Le Drian said in a statement on Tuesday evening.

Mr Lu writes commentary and publishes it online as “observations of a Chinese diplomat posted to Paris”, Le Monde reported.

French authorities objected to two published items in particular. In the first, the ambassador claimed that amid the coronavirus outbreak “old-age pensioners in nursing homes are forced to sign statements foreswearing emergency treatment”, and that healthcare personnel in care homes “have abandoned their jobs from one day to the next, collectively deserted, allowing residents to die of hunger and illness”.

The source for this false report appears to have been an article in Ouest-France newspaper about nursing homes in Spain.

The second item concerned a petition by French parliamentarians to admit Taiwan, which is not recognised by China, to the World Health Organisation (WHO).

“The WHO has been under siege by westerners,” Mr Lu wrote. “Some of them have even made ad hominem attacks on its director general, Dr Tedros Adhanom Ghebreyesus. Taiwanese authorities, supported by more than 80 French parliamentarians, even used the word ‘negro’ against him. I still cannot understand what was in the minds of these French officials.”

The parliamentary appeal was published by L’Obs magazine on March 31st. It does not refer to Mr Ghebreyesus, an Ethiopian microbiologist, and does not use the term “negro”.

Mr Lu earned a reputation for being hawkish in his previous post as ambassador to Canada. France has previously objected to his support for the Chinese communications giant Huawei.

France is struggling to balance its dependency on Chinese-made surgical masks, ventilators and personal protective equipment amid the Covid-19 pandemic with reservations over what it sees as Chinese attempts to capitalise on “mask diplomacy”.

Now Mr Macron wants Chinese support for his African initiative. On Monday, the French president called for massive debt forgiveness for Africa, at a time when the pandemic threatens struggling economies.

The G7 group of the most developed nations and the G20, of which China is a member, have since agreed to a one-year suspension of debt for the world’s poorest countries.

China is one of the biggest lenders to Africa, with a loan portfolio there of €133 billion.