The latest guidelines and restrictions to help prevent the spread of coronavirus, also known as Covid-19 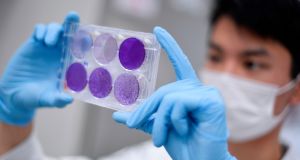 A researcher works on virus replication in order to development a vaccine against the coronavirus Covid-19, in Belo Horizonte, Brazil. Photograph: Douglas Magno/AFP via Getty Images

A study indicating that the BCG vaccine for tuberculosis could help to protect against Covid-19 is “a potential game-changer” in global efforts to curb the pandemic, according to a leading immunologist.

The research indicating that countries whose populations have high levels of BCG vaccination had significantly fewer Covid-19 deaths was the most significant development since the virus has spread, said Prof Luke O’Neill, who has specialised in study of the vaccine at Trinity College Dublin.

While he stressed the research was largely a statistical one and so came with caveats, there was a case for authorities moving to provide a BCG vaccine top-up for everybody age over 70. “This is feasible and should be considered. It doesn’t mean we change behaviour, such as physical distancing and washing your hands,” he said.

However, children currently aged five and under in Ireland will not have the vaccine. BCG vaccine is given to protect babies against TB but Ireland has had no BCG vaccine since May 2015 and no children have been vaccinated since then, the HSE confirmed. This coincided with a vaccine shortage in Europe – stocks have become available in recent months.

In February of this year the National Immunisation Advisory Committee, and the Health Information and Quality Authority recommended to the Department of Health that BCG vaccine “does not now need to be given routinely to all children”.

Most of the Irish population would still have some immunity against Covid-19, if the connection is proven, Prof O’Neill said.

The preliminary study suggests countries that require citizens to get the BCG vaccine are showing fewer number of confirmed cases and deaths from Covid-19.

Dr Gonzalo Otazu of New York Institute of Technology started working on the analysis after noticing the low number of cases in Japan. His findings have been posted on medRxiv, a site for unpublished medical research.

Prof O’Neill said there was evidence going back 30 years that those getting the vaccine get less measles and less respiratory illness.

Given the “great science behind the BCG vaccine” this research is worth serious consideration, he believed. Already, scientists are moving quickly in an attempt to verify if there is a medical basis for the connection.

Clinicians in six countries are running trials giving front-line health workers and older people the BCG vaccine. He underlined the study is “a correlation, so there is always an issue of confounding variables”. So a high Covid-19 death rate in Italy may be due to low BCG vaccination or a higher proportion of older people.