Coronavirus: Call for nursing homes to carry out their own Covid-19 tests 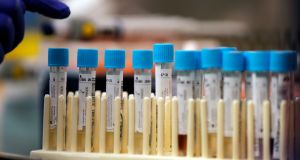 Nursing homes and residential facilities will still have to send tests to labs but conducting their own testing would allow the sector to become a priority. Photograph: Gerald Herbert/ AP Photo

Nursing homes should be allowed to carry out their own Covid-19 testing in order to help stem the coronavirus outbreak in residential care homes, the sector’s representative has said.

One north Dublin nursing home, which is battling its own outbreak, is to start testing residents in the next day or two because of large-scale delays in State testing of residents and staff.

The nursing home sector has also struggled to maintain adequate staffing levels due to employees having to stay at home in isolation while they await test results.

Nursing homes and residential facilities will still have to send tests to labs but conducting their own testing would allow the badly affected sector to become a priority in the testing process.

The State’s chief medical officer, Dr Tony Holohan, said at Wednesday’s briefing there were 137 reported clusters of infection in nursing homes and residential facilities. This is an increase from just four clusters in nursing homes on March 21st. A Covid-19 cluster is defined as two or more cases.

The nursing home sector has criticised the Government that the various support measures promised by Minister for Health Simon Harris to tackle the virus have not been delivered.

Tadhg Daly, chief executive of Nursing Homes Ireland (NHI), the representative body for the sector, said some nursing homes had the medical and nursing staff to be able to carry out their own tests and that anything to improve testing would help homes manage the outbreak better.

“There are so many delays in testing that any measure to improve that testing by nursing homes themselves is something that should be actively considered,” he said.

A survey of nursing homes by NHI found that 74 nursing homes – or 44 per cent of the 167 homes that responded – had waited 10 days or more for the results of tests on residents.

Just 23 per cent, or 38 homes, waited between one and three days for results.

Mr Daly criticised the delays in the delivery of personal protective equipment (PPE) to nursing homes in some parts of the country.

His group’s survey of nursing homes found that just 51 homes, or 24 per cent of those surveyed, received a full supply required for a short-term basis, equal to three days’ worth of use.

Some 63 nursing homes, or 29 per cent of the total, were still awaiting a delivery of any PPE.

“It is not consistent and it is not countrywide and that is what is frustrating people,” he said.

Dr Holohan told the daily Department of Health briefing on Wednesday evening that the turnaround in testing was now being done in much shorter periods and that healthcare workers were being prioritised.

He added that in the absence of the desired same-day or next-day test results, nursing homes should assume that residents who show symptoms consistent with the Covid-19 infection, have the disease particularly where there is already a confirmed case in the nursing home.

The outbreak is badly affecting staffing levels as the HSE recruits additional staff to hospitals, and nursing home nurses and employees must self-isolate at home if they are exposed to the virus.

Some 178 nursing homes had 719 healthcare assistants become unavailable for work due to the coronavirus outbreak. Another 125 homes had lost 341 employees.