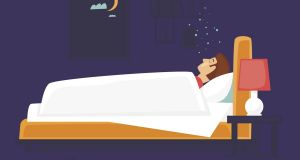 ‘My craziest coronavirus dream thus far involved me frantically running into a grocery shop to get food for my family. It was like a scene from a zombie apocalypse.’ Illustration: iStock

Having trouble sleeping these days? You're not alone. Jennifer O'Connell wrote recently about how the coronavirus outbreak could be impacting on our ability to nod off, and it seems the crisis is playing with our psyche, too. Colleagues share dreams about falling hopelessly in love with Simon Harris, being offered jobs to head up the task force after a chance meeting with Tony Holohan, and engaging in clandestine dinners with Leo Varadkar.

Here, Irish Times journalists and readers tell us about some of the craziest dreams they’ve been having since the pandemic hit.

My most vivid dream this week was of finding myself living in a caravan by the water’s edge in some unfamiliar Scottish city. When I left the caravan to seek food - nothing was open - I found an unlocked door in an alleyway and entered, wondering if it was a shop. What I found was a secret dystopian circus, where tigers and leopards and cheetahs hopped sadly around on their hind legs, shackled. Some had no front legs. One disembodied tiger head skated around the floor, chasing after my ankles like a demented puppy. Every animal was in various stages of dying. Half-naked gymnasts were handcuffed to each other in pairs, sleeping on a concrete floor, and amid my horror at the scene, I kept wondering how I could report on it. That dream has to be the product of watching the bizarre Tiger King on Netflix and the anxiety of trying to do my job in these challenging times.

I have been having recurring dreams about my local pub, which is strange because I’m not exactly Norm Peterson from Cheers. I’m not propping up the bar every day, or even every week - but, apparently, now that it’s closed I can’t stop thinking about it. The latest involved ordering pints at the bar, but they would disappear before I could drink them. I made the mistake of telling my wife about the dreams, so when the landlady came into her shop recently, my wife told her: “My husband has been dreaming about you.” Did she provide more details for context? Nah, that wouldn’t have been as funny apparently.

I had a dream on Wednesday night that social distancing applied to absolutely everything. This meant that I had to be super careful that the pork chops didn’t touch in the frying pan, and was really stressed out because the washing had to be hung all spaced apart on the line.

I had a dream I was sewing a facemask, over and over, fussing about the pleating and the biased binding. It was a Laura Ashley pattern, starchy and flowery and the pleats were crisp and neat, which in itself is completely unlike me as I don’t have any of those things in the house and am a mediocre sewer. I was hand stitching the pleats, but I couldn’t seem to get to the end of it and the stitches were so tiny I could hardly see them. It was incredibly frustrating. And then I woke up and read that the Center for Disease Control in the US had advised everyone to wear masks in public, but Donald Trump said if you can’t find a mask, just wear a scarf. The man is an idiot, but sewing a mask is no joke either!

I was on holiday in London, walking around Covent Garden among crowds of tourists and street performers. No social distancing was necessary in this pre-pandemic world. Suddenly it started raining and I was running, running, running for miles, past lines of traffic and busy cafes. I woke with a longing for the freedom I had taken for granted before the virus changed our reality.

Simon Coveney asked me to go for a spin in his car. Nothing sexual. I agreed. We drove around the scenic spots of Sligo, then on to a German multinational supermarket to pick up supplies. I woke up and I thought it had all actually happened.

Dreamt that I was in lockdown with all my uncles and aunts in my grandfather’s old house. I saw they had loads of soap and robbed one, as I thought my family had none. Still felt guilty about it after I woke up.

I was at home sick and in isolation and I had just watched, over the course of a couple of nights, Rolling Thunder Revue, a Martin Scorcese documentary about a tour Bob Dylan took of the US in 1975. I have been a Bob Dylan fan since I was a teenager and his performance in Nolwan Park was one of my highlights of 2019. I dreamt that I was in a large, bright room (it might have been an arts centre) with Bob Dylan and a lot of other people. Bob was about to give a talk or recital. The room was packed and I was looking for an empty chair. Suddenly I came to my senses and realised I should not be there at all. I was supposed to be in social isolation. What if I was infectious? What if.... I killed Bob Dylan? I woke in a cold sweat. A few days later (in real life), I was still in isolation, but starting to feel better. I checked my emails and saw there was one from Bob Dylan, to his fan club. Bob was releasing his first original song in eight years. It was 16 minutes to be savoured. He had a message for his fans too: “Stay safe, stay observant, may God be with you.”

My craziest coronavirus dream thus far involved me frantically running into a grocery shop to get food for my family. It was like a scene from a zombie apocalypse, with people running around in all directions looting the store completely. The only thing I could find was a stick of butter (Kerrygold, natch), and I hastily shoved it into my shopping bag and ran out as fast as I could. On the way out, I stumbled and the stick of butter fell out of my bag. Out of nowhere, a woman dashed over to the butter before I could get to it. While I thought she was going to retrieve it for me, she instead stepped on it wearing a stiletto heel and gave me an evil smile. She pulled it off her stiletto and swiftly ran away, while I looked on in horror. I then woke up with my heart racing and a feeling of dread. Fortunately, I checked my refrigerator, and I still had plenty of butter, but that dream left me unsettled for the rest of the day.

Last night I dreamt I was drawn to play tennis against Serena Williams at Wimbledon, and it was a sell-out. The place was packed - she was on one side of the court and I was on the other. However, I was not properly dressed for tennis. I had a bodyguard and two minders, and one of the minders went out to get me a dress. She came back with one that looked between a short wedding dress and a ballerina dress. I thought it will do - it is how I play that matters. I was worried I would be fined for dressing like that on the court, so they put a sheet around me so no one could see the best of me. But by that time the crowd was leaving, as they were fed up waiting. Then Prince Charles arrived and they came back. They all had the virus, and just as I was about to get on the court, I woke up and never got to hit a ball...

The Friday before last, I had had an online college lecture day (MSC in Psychotherapy in DCU) and the morning session was on domestic violence pertaining to couples therapy. The afternoon was on unconscious attraction (also couples therapy), which featured heavily on Freud’s sexual intimacy work with emphasis on castration. Then, after seeing the new lockdown procedures by Leo and co, I slept and dreamt of some intense woodworking (measuring, marking, shaping and cutting) with Leo Varadkar and another, unrecognisable gentleman. What make you of that Dr Freud?

Four decent bottles if you’re just getting to know wine, including a great-value sparkler
4