Coronavirus: 48-hour ban on all flights from Britain due to fears over new virus strain

Flight suspension from midnight, ferries to carry hauliers only; no change for North

The Netherlands, Italy and Belgium became the first EU countries to to ban flights carrying passengers from the UK, after Britain detected a new coronavirus strain. Video: Reuters 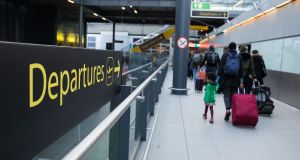 Passengers are seen disembarking from an inter-terminal train at London Gatwick Airport. The Irish Government is considering a ban on non-essential travel from Britain in response to a new, fast-spreading Covid-19 strain that has been found in England. Photograph: Bloomberg

A 48-hour ban on all flights arriving into the Republic from Britain comes into force at midnight tonight as part of an emergency response to growing concern over a new variant of Covid-19 that is reported to be spreading rapidly in southeast England.

Ferries will continue to operate for haulage. No travel restrictions will apply between the Republic and Northern Ireland.

Minister for Transport Eamon Ryan said it was likely the 48-hour ban on flights from Britain will be extended.

Mr Ryan also said it is not yet known whether the recent sharp increase in cases in Ireland has any link to a more infectious strain of Covid 19 which has been reported in Britain.

“I think realistically it is hard to see that things are going to change in the next few days. It is more a review of the mechanisms that are being used or how it is working but I think there is not a high probability that we would be returning to a schedule of flights straight away.”

He said the Government will use “flexible mechanisms” to manage the repatriation of Irish citizens who were, for example, transiting through the UK on their way home.

He said ferries will continue to operate for freight traffic which was needed for “essential food supply chain and other reasons.”

Asked how he would stop people boarding ferries if they can get access, he said there would be “co-operation with the ferry companies in terms of how they manage it.”

Mr Ryan said the Stormont executive is “fully up to speed with what we are doing.”

The North’s Ministers were due to meet tonight to discuss concerns over the “aggressive new strain” of Covid-19 responsible for a sharp rise in cases in England.

The emergency meeting was scheduled for 9pm following requests by Ministers from Sinn Féin, SDLP, Alliance and the the Ulster Unionist Party. The Ministers are also expected to consider arrangements for the Christmas period.

Mr Ryan said the European Centre for Disease Prevention and Control has said it is likely the strain is circulating in other jurisdictions.

“We should err on the side of caution. We have seen a significant spike in the last two or three days, we don’t know yet whether that is connected to a more virulent strain. We will have to follow Nphet advice and that will come from genome testing and monitoring.”

Several European countries, including Italy, Belgium and The Netherlands, placed new restrictions on travel to and from the United Kingdom on Sunday due to concern over the new virus strain.

Mr Donnelly also said he was concerned that the new variant of the Covid-19 virus may have arrived in Ireland. There have been no confirmed cases to date.

“I don’t think anything is inevitable but I will be very, very, pleasantly surprised if it isn’t here,” given the number of flights ferries and travel between the UK and Ireland, he said.

It would be “very naive to think it would not potentially be here”.

Mr Donnelly said he would like Ireland north and south to have similar measures in place when it came to tackling Covid-19.

“We certainly are not considering sealing the border physically. It is politically not practical but certainly what we could well be doing is looking at issuing very strong advice in terms of travel north and south,” he said.

Earlier on Sunday a leading public health expert said travel restrictions on passengers from Britain was a “reasonable precaution” to prevent a mutant variation of Covid-19 spreading to the State.

Dr Gabriel Scally said the rate of spread in the south-east of England was very high and the early analysis of the new variant “gives cause for concern” that justify restrictions on travel.

“I think it is a reasonable precaution to stop flights for the time being without giving a fixed point about that,” he told The Irish Times on Sunday morning.

The Department of Health said on Sunday morning that analysis by UCD’s National Virus Reference Laboratory has found no evidence of the variant of the virus in any infections analysed to date.

The UK government has imposed a lockdown on London and most of the south-east of England over a variant of the coronavirus that British prime minister Boris Johnson has said could be as much as 70 per cent more transmissible than previous versions of the virus.

People living under the new Tier 4 rules in Britain, the most severe lockdown, have been asked not to travel outside their region and others outside the area have been advised not to visit there.