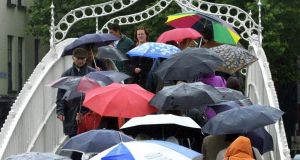 According to the annual CSO Facts & Figures report average rainfall in 2018 was 1,224 millimetres compared to 912 millimetres in 1971. Photograph: Haydn West/PA

In an era captivated by global warming and shifting weather patterns, Ireland is getting wetter.

According to the annual Central Statistics Office (CSO) Facts & Figures report, which gives a tantalising portrait of the country in numbers, average rainfall in 2018 was 1,224 millimetres compared to 912 millimetres in 1971.

The CSO compilation – data published during 2019 but which covers topics over a number of recent years – gives other insights into the Irish environment.

For example, the amount of land under settlement in 2017 was just 1.7 per cent while grassland accounted for 58.5 per cent. The area covered by forest, meanwhile, increased from an average of 7.3 per cent in the early 1990s to 10.8 per cent.

In 2017 renewable energy accounted for just over 30 per cent of electricity generation. In 2018 number of public bus and coach passenger journeys was at an average of 226.7 million compared to 234.1 million between 2005 and 2009.

However, while there was a welcome reduction in bus use, cycling rates have also declined. Between 1986 and 2016 the number of people aged 15 and over who cycled to work fell from 5 to 4 per cent among men and from 6 to 2 per cent among women.

In the 12 months to October last year, 45,486 household purchases were filed with Revenue of which 31.5 per cent were first time buyers.

The report also shows that Ireland’s population is fast approaching the five million mark, estimated last year to have reached 4,921,500.

Those figures relate to annual estimates as opposed to five-yearly census data, the former calculated according to data on migration, births and deaths. Of the total population last year, 87.3 per cent were Irish nationals.

By the third quarter of the year just 128,000 people were found to be unemployed, down by 11 per cent over the previous year.

In terms of how Ireland has evolved socially, the report found that 33.2 per cent of LGBTI+ people experienced discrimination, the highest single grouping.

In 2019, just one-in-nine chief executives of large enterprises were women and 72 per cent of senior executive roles were occupied by men.

Despite the ongoing contention surrounding broadband supply, the CSO data showed 91 per cent all households had internet access, while almost all of those with two adults and dependent children (99 per cent) had. Fraudulent emails, or phishing, was experienced by 15 per cent internet users.

And in one of the most popular annual statistics, the office reports Jack and Emily as holding on to the position of most popular baby name in 2018, although they are joined for the first time in the top 100 list by Frankie, Freddie, Bella and Ada among others.

Slightly more than 31,000 people died in 2018 with the leading causes recorded as heart disease.

Other figures in the report went even further back. In health, it looked at 2017 data showing overall expenditure of €21.1 billion, an increase of 13 per cent since 2012. The number of GPs working under the General Medical Scheme increased from 2,413 in 2013 to 3,005.

In 2016, four out of five higher education graduates were in “substantial employment” in the first year after completing their course. However, median male earnings per week slightly outstripped those of their female counterparts at €485 to €470. At the same time, females were more likely to be “substantially employed”.