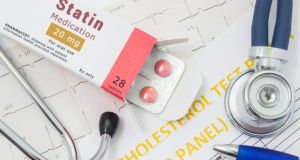 Previous studies have suggested that statins, which are used to reduce the risk of heart attack, stroke and heart disease, could have a role in slowing down the growth of different types of cancers. Photograph: iStock

Men who had taken statins to reduce their cholesterol had a 24 per cent reduced risk of developing the more lethal type of prostate cancer, though there were no difference in the overall rates of the case among men who were prescribed the drug, according to the study.

This research, published Thursday in Clinical Cancer Research journal, was carried out by Dr Emma Allott of Queen’s University Belfast, and colleagues at Trinity College Dublin and the Dana-Farber/Harvard Cancer Center.

Previous studies have suggested that statins, which are used to reduce the risk of heart attack, stroke and heart disease, could have a role in slowing down the growth of different types of cancers.

This specifically looked at ways statins might affect prostate cancer, using data from a study funded by the US National Cancer Institute.

“Some prostate cancers are slow growing and will not affect the man over the course of his lifetime, but others are aggressive and often deadly. My work is to understand the biology driving these different types of prostate cancer in order to reduce the number of men who develop this lethal form of the disease,” she said.

“By studying a large group of men who had been monitored for 24 years, we were able to see the link between statin use and the prevention of lethal prostate cancer. We then looked at tissue samples from some of these men to try and understand why the statin use was having this impact.

“Although the findings are at an early stage, we were able to see that statin use may affect inflammation and immunity levels in the prostates of some men as well as having an effect on the characteristics of the tumour itself.

“Our findings are in agreement with some of the known biology of statins but are the first to observe these effects in prostate cancer.”

The Irish Cancer Society, which funded the research, said it would not recommend that men start taking statins unless prescribed to do so.