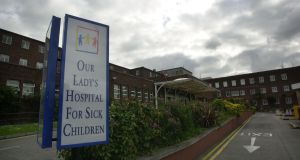 The main children’s hospital in the State is not screening patients for a superbug currently spreading through the health system, a new report shows.

Our Lady’s Children’s Hospital in Crumlin is not routinely screening children who had been inpatients in any hospital in Ireland, including Crumlin itself, for the CPE bug over the last year, according to the Health Information and Quality Authority (Hiqa).

As a result, Hiqa inspectors found the hospital was not in full compliance with national screening guidelines for CPE (Carbapenemase Producing Enterobacteriaceae), which is highly antibiotic-resistant and can be lethal when it enters the bloodstream.

Inspectors also noted a “lack of clarity” among staff on Our Lady’s Ward around screening of patients on transfer from other hospitals.

Hiqa says, in an inspection report published on Friday, the hospital “considered it appropriate” to modify the national screening guidelines on CPE.

Only 53 per cent of consultants had attended hand hygiene training over the previous year, the report noted.

CPE has been linked to eight patient deaths in University Hospital Limerick. The newest in a long line of bacteria that are extremely difficult to kill with antibiotics, it lives harmlessly in the gut in healthy people but can be lethal if it gets into the bloodstream or urine. It poses a particular risk to older people and those with reduced immune system function.

A separate report on St Colmcille’s Hospital in Loughlinstown, found dated infrastructure posed many challenges for staff and patients.

There was a lack of single rooms and en-suite facilities, and on the day of inspection, only five of the 14 patients for who single room isolation was indicated were actually in single rooms. The remainder were “cohorted” with patients who were colonised or infected with a similar strain of multi-drug organism.

Some 68 per cent of hospital staff had attended hand hygiene training in the previous year.