More than 5,000 neurosurgical procedures carried out at Temple Street over past decade 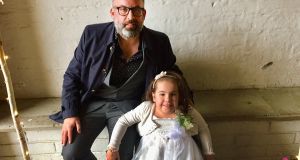 Bernard Mulvany and his daughter Sophia (8), from Marino.

Babies as young as two months are receiving brain surgery at the State’s only neurosurgery unit for young children, which marks its 10th anniversary on Friday.

More than 5,000 neurosurgical procedures have been carried out over the past decade at Temple Street hospital’s department of paediatric neurosurgery in Dublin.

Many of the unit’s patients have congenital conditions, while about 50 young children a year are treated for brain tumours. One-third are emergency cases.

The work of the unit has helped improve the quality of life of some of the most vulnerable children in the country, though the impact on overall survival rates is less certain due to the small numbers involved, according to consultant paediatric neurosurgeon, Darach Crimmins.

Unlike much of the rest of the health service, paediatric neurosurgery is not plagued by delays. Throughout the 10 years, the waiting time for children needing procedures or appointments has been kept at about two weeks, usually by putting on extra clinics, according to Mr Crimmins.

“Outpatient waiting lists are an artificial thing, in my view. If you see everyone when they’re referred, you don’t have a list. If you leave it six months, you still have to see the patients,” he said.

The national centre is responsible for brain and spine surgery, both elective and urgent or emergency, on children referred from across the country, aged up to six years. Most surgery on older children is performed by Temple Street neurosurgeons in a dedicated theatre at Beaumont Hospital.

The anniversary is being marked by a symposium in the Royal College of Physicians in Ireland on Friday, where the focus will be on the improvements in services expected when Temple Street moves to the new national children’s hospital at St James’s Hospital in 2021.

“In Beaumont Hospital where we perform neurosurgery on children over six years of age we have access to a large theatre with separate facilities which allows for very efficient turnaround but there is limited access to paediatric anaesthesis and intensive care unit facilities. In Temple Street the theatre where we perform neurosurgery is small and relatively cramped but there is anaesthetic support and access to paediatric intensive care. But we also have no dedicated neurosurgical ward.”

The new children’s hospital will have a dedicated neurosurgery theatre and 15 single-bed rooms for neurological patients, according to Mr Crimmins. Another major development will be the provision of inter-operative MRI, which means scans can be performed in theatre during an operation.

The housing of all children’s services under one roof promises to revolutionise treatment. At present, Mr Crimmins explained, a patient in Crumlin children’s hospital might have to come to Temple Street for surgery. From there, transport to Beaumont might be needed for an angiogram, while chemotherapy would be administered back in Crumlin. Further transport to Temple Street might be needed if complications arise.

For Bernard Mulvany and his daughter Sophia (8), from Marino, the new hospital will make a huge difference. “I’m hopeful it will change everything, even if I’m not sure about the location. The thought of getting there through rush-hour traffic in an emergency, when your daughter is screaming in the back of the car, is not great.”

Mr Mulvany knows that an emergency will arise at some point, as Sophia has had reason to use Temple Street’s neurosurgical unit on many occasions. Born with spina bifida, she required surgery to put a shunt in her brain at 24 hours, and spent the first six months of her life in the hospital.

Since then, the shunt has required revision – replacement – eight times, often at short notice. “You have hours to get it sorted,” he said, “but the team in Temple Street always seem to be there. They’re always working.

“Sophia is fine now but the next shunt revision can happen at any time. It’s complicated and stressful.”

However, Mr Crimmins said: “The surgeons haven’t got any better over the past 20 years, but the technology and the imaging have.”