Children in their thousands ‘suffering’ on dental waiting lists 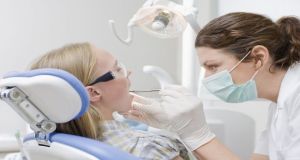 The longest delays were in the southeast of the country: almost 23,000 children and adolescents are waiting on an appointment. File photograh: Getty Images

Tens of thousands of children are languishing on dental waiting lists, many “suffering through pain and infections”, Fianna Fáil’s health spokesman Stephen Donnelly has said.

According to figures he obtained from the Health Service Executive, 84,000 children are awaiting check-ups or treatment in the public system.

“I recently met with the Irish Dental Association (IDA) who explained that children with what would be considered very minor problems are left waiting so long that their treatment becomes critical,” he said.

The HSE said fast emergency care for pain, infection and trauma is available to all children.

Mr Donnelly, who is critical of public waiting lists for medical treatments, said children are left suffering from issues that could be easily remedied.

“In some cases children are missing days from school, being put on repeated courses of antibiotics and requiring surgery because the problem has been allowed get so bad,” he said.

The longest delays were identified in the southeast of the country – 22,900 children and adolescents are awaiting appointments in counties Carlow, Kilkenny, south Tipperary, Waterford and Wexford.

There are 18,500 in the northeast around Cavan, Monaghan, Sligo and Leitrim and a further 12,900 in the midlands area, including Laois, Offaly, Longford and Westmeath.

Quoting official statistics, Mr Donnelly said about 7,000 children are sent to hospital each year to have a tooth removed under general anaesthetic.

“We’ve also discovered that in some areas, when children miss their assessments, they are simply taken off the waiting list,” he said. “We know that the main issue is a staffing shortage.”

What is the HSE response?

According to the Wicklow TD, the dental association recommends children be assessed three times during their primary education.

“The HSE claims it targets pupils in first, second and sixth class. But we now know there just aren’t enough dentists and oral hygienists to visit our schools. Some children are seen once, others never get an appointment,” he said.

“Many parents are opting for private treatment to escape the public system. However, for lots of families this isn’t an option and it’s wholly unfair.”

In response, the HSE said almost one million children, up to and including those aged 15, are eligible for free dental care. More than 70,000 present each year for emergency care, many requiring extensive treatment.

The service targets those with the greatest need and the highest risk of dental disease.

“It is important to state that the combined number on dental waiting lists include large numbers of children that are typically waiting a few weeks to be called for preventive treatments such as fissure sealants,” it said.

“Others are waiting for restorative treatments such as fillings, while there are also children waiting for dental treatment under anaesthetic in hospital.”

Children are mainly seen in first or second and sixth class of national school. Uptake rates are for targeted screening and treatment are in excess of 95 per cent.