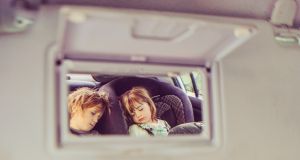 Children are at risk of dangerous levels of air pollution inside cars because exposure to toxic air is often far higher inside than outside vehicles, according to one of Britain’s leading scientists.

The former chief scientific adviser to the British government Prof Sir David King questioned whether parents realised the scale of risk to their children. Walking or cycling to school would be much better for children’s health, he added, while diesel cars pose a particular health threat.

Air pollution is known to damage children’s developing lungs but recent research also indicates it harms children’s ability to learn and may damage their DNA.

“Children sitting in the backseat of vehicles are likely to be exposed to dangerous levels [of air pollution],” Prof King said in an opinion piece published by the Guardian. “You may be driving a cleaner vehicle but your children are sitting in a box collecting toxic gases from all the vehicles around you.”

He said new legislation to ban smoking in cars with children (as has happened in Ireland) had gained widespread support, but he questioned “why are we still happy for our children to breathe in toxic emissions in the back of our cars?”

“The best thing for all our health is to leave our cars behind,” said Prof King, who is an adviser to the British Lung Foundation. “It’s been shown that the health benefits of walking and cycling far outweigh the costs of breathing in pollution. If more drivers knew the damage they could be doing to their children, I think they’d think twice about getting in the car.”

He cited range of experiments, some as far back as 2001, have shown that drivers inside vehicles are exposed to far higher levels of air pollution than those walking or cycling along the same urban routes.

He was supported by Prof Stephen Holgate, an asthma expert at Southampton University who said there was enough evidence to tell parents that walking and cycling exposes their children to less air pollution than driving. “It is nine to 12 times higher inside the car than outside,” he said. “Children are in the back of the car and often the car has the fans on, just sucking the fresh exhaust coming out of the car or lorry in front of them straight into the back of the car.”

Children are more vulnerable than adults, he said, because air pollution can stunt the growth of their lungs and because it increases the risk of sensitisation which can lead to asthma and other respiratory conditions.

Their views were also strongly endorsed by a leading Irish-based expert on air pollution, Prof John Sodeau of UCC Centre for Research into Atmospheric Chemistry. The risks in Ireland were the same but air pollution monitoring was inadequate in Ireland; so much so we did not even know the scale of air pollution outside a vehicle, he said. The big difference between Ireland and London, for example, was a far greater capacity for roadside air monitoring.

Levels of nitrogen dioxide (NO2), emitted mostly by diesel vehicles, have been above legal limits in almost 90 per cent of urban areas in the UK since 2010. The toxic fumes are estimated to cause 23,500 early deaths a year.

In Ireland, while the most recent figures from the Environmental Protection Agency, for 2015, show we did not exceed EU limits, it warned of an upward trend, which needed to be monitored very carefully.

It was clear that the ultimate solution was electric car or hydrogen-fuelled vehicles, said Prof Sodeau who is an adviser to the Irish Asthma Society. “I agree entirely with what was said by Prof King...You won’t get everybody on a bike or walking but that should be encouraged,” he told The Irish Times.

The research shows that while N02 is one of the big polluters impacting on people’s respiratory system and asthma levels, when it combined with tiny particles it could also cause cardiovascular problems for adults. Recent studies by the World Health Organisation have concluded there are no safe levels of these form of pollutants, ie they are having a negative health impact, even at lower concentrations, and more than previously considered.

Prof Sodeau said long-term exposure studies confirmed the risk to younger children in cars, though knowledge on the impact of short-term car rides was “weak”. While diesel car makers were pointing to the removal of NO2 and PMs through increased use of filters, that was dependant on how well maintained they were.

The EPA’s air quality manager Patrick Kenny confirmed there are no similar studies of air quality in cars in Ireland. However, he added: “We could very much assume that the ratios discussed [emissions outside a vehicle compared to inside] would be completely comparable to Ireland.”

Ireland’s overall concentrations of air pollutants due to traffic, however, was lower than in the UK, and we have never exceeded the EU limits, he said, though we have exceeded more demanding WHO guideline values which are likely to be further tightened soon.

“In our urban areas we face potential exceedances of nitrogen dioxide limit values unless we move to clean transport choices,” he said. That entailed walking/cycling; use of the electric car and clean technology in public transport.

The EPA has a public tender process in train to establish a new national ambient air quality programme for Ireland, with a view to increasing the amount of information available to the public, expanding the number of monitoring stations and improving the ability to forecast air pollution events.

Prof Holgate said walking or cycling are better when possible to reduce pollution exposure in cars and to increase physical exercise. “There are multiple benefits to be gained. But parents are confused at the moment because they think there is less pollution in cars than outside, which is not the case.”

Recent research has added to the concern about the impact of air pollution on children, beyond the direct harm to their lungs, he said. A study in Barcelona showed that air pollution reduces the ability of children to concentrate and slows their reaction times. “This adds to the evidence that air pollution may have potential harmful effects on neurodevelopment,” the scientists wrote.

Drivers have been given tax breaks by successive UK governments, including when Prof King was chief scientific adviser, to buy diesel cars because they have lower carbon dioxide emissions. Stricter regulations were supposed to limit NO2 emissions from diesels but cheating and exploitation of loopholes by car manufacturers led to vehicles that emitted far more pollution on the road than in lab tests.

1 Coronavirus claims one more life and 11 new cases reported in Republic
2 Rare whale dies after getting into distress in Wicklow Harbour
3 Bobby Storey: The IRA's planner and enforcer who stayed in the shadows
4 Covid-19: Travel restrictions to stay and 'green list' put on hold amid fears of second wave
5 WHO stops hydroxychloroquine trials for hospitalised Covid-19 patients
Real news has value SUBSCRIBE