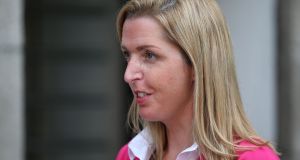 Campaigner Vicky Phelan said the tribunal was ‘a slap in the face’ for the women affected by the CervicalCheck controversy. Photograph: Nick Bradshaw

The CervicalCheck Tribunal, which was due to start its work on Tuesday, has been postponed for “a number of days”, the Government said on Monday night, following meetings between Minister for Health Stephen Donnelly and victims’ representatives.

The tribunal was due to commence its work on Tuesday morning but, in the face of objections from some victims, including campaigner Vicky Phelan, the Government agreed to postpone the start date in the hope that their concerns can be met.

It is understood that Mr Donnelly has briefed colleagues in Government that he is hopeful that most of the victims’ concerns have been addressed and that they will engage with the tribunal in the coming days.

A spokesman for 221+, the cervical cancer patient support group, said that there had been “progress” in the discussions on Monday and that the group was in continuing contact with the Minister for Health. He said that they needed to see some of the commitments made by the Minister communicated in writing, but that they hoped to be able to present them to their members in the coming days.

The fact that the Government is willing to pause the tribunal in an effort to secure the group’s co-operation was a positive sign, he said.

Last week, Ms Phelan, the terminally ill Limerick woman whose court case exposed the CervicalCheck controversy two years ago, said the tribunal was “not fit for purpose” and “a slap in the face” for the women affected. However, officials believe that a series of meetings and contacts on Monday and in recent days can address the concerns expressed by Ms Phelan and other campaigners.

The tribunal was due to start on Tuesday at premises in Smithfield in Dublin, and is to be chaired by a judge of the Court of Appeal, Ms Justice Ann Power.

It is intended to provide compensation to women affected by the misreading of cervical smears, who subsequently became ill with cancer that was not detected early, and to allow them tell their stories. Its proceedings will be held in private, except where victims specifically request otherwise.