Number of flu deaths has doubled over the past week 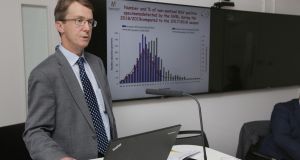 The number of people who have died from flu this season has more than doubled in the last week, the Health Service Executive (HSE) has confirmed.

Dr John Cuddihy, HSE director of public health, said in a briefing for reporters on Thursday that there had been 55 admissions to intensive care units and 21 deaths in the season to date. There had been nine fatalities from flu as of last week.

There have been 35 respiratory disease outbreaks, of which 13 were confirmed to be flu.

Over the past week there were 215 hospital admissions, compared with 254 in the previous week. That brings the total to 767 for the season. Hospital admissions were mostly in the under-five and over-65 age categories.

Dr Cuddihy said the indicators suggested that the flu season had peaked. The GP flu consultation rate decreased to 42.5 per 100,000 over the past week from 51.6 the week before.The under-fives were the only age group that showed an increase in the GP consultation rate.

“Overall all of the indicators for influenza have shown a decrease,” said Dr Cuddihy. “In some of them that’s built on decreases in week two. That would suggest that influenza has peaked. If we see a continued decrease next week that would confirm that.

“That would mean we are looking at about an eight-week season this year. After the peak in activity we will see another four to five weeks of ongoing activity, albeit decreased.”

He said hospital attendances were up 8.8 per cent compared to last year. The number of admissions from emergency departments was up 10.7 per cent. The increase was driven by respiratory conditions, with the higher activity in the lower age groups.

Conversion rates, which is when attendees are admitted to hospital, were marginally higher than last year for the general population, and almost 2 per cent higher for the over-75s.

Patient experience time, which is how long patients spend in the emergency department, was improved on last year. Some 96.3 per cent of patients passed though within 24 hours, while 56.4 per cent of the over-75s passed through within nine hours.

In terms of the trolley count, there were 342 people on trolleys at 8am on Thursday, which was 14.3 per cent lower than last year.

For the month to date the total number of people on trolleys has been down 14.1 per cent on last year.

Coronavirus: The businesses allowed to stay open under new measures 07:53
Coronavirus: Galwegians adjust to a new traffic-free reality 06:00
Estranged couples do not have to stick to court orders during coronavirus crisis 01:58
Coronavirus: Oxygen equipment meant for Ireland held back by Italy 01:00
Coronavirus: Motorists must slow down to avoid overburdening hospitals – RSA 01:00